Call of Duty: Modern Warfare: Mobilized is the third Call of Duty video game developed for the Nintendo DS. It was developed by n-Space, who developed the previous two Nintendo DS Call of Duty games, and was published by Activision. The game was released worldwide on November 10, 2009.

Call of Duty: Modern Warfare: Mobilized also features a six-person online multiplayer mode, a Survival Mode in which players must fend off waves of enemies at once, and an Arcade Mode where players must complete the campaign in a set time limit for points and unlockable achievements. There is also a new interface and improved controls and mobility. The AI system was improved as well: enemies will take cover, charge at the player, pull back when the player enters the room, and the players allies will support him better.

Five years after Call of Duty 4: Modern Warfare (DS), Ruler Prince Farhad has left his country due to the Ultranationalists. In the middle of this, he decides to purchase a nuclear device to use against them. The Gopher Squad of the SAS and the Warthog Squad of the USMC quickly work together to prevent the construction and activation of the nuclear device. The nuke is discovered to be supplied by Colonel Ayala, who Sgt. O' Neil and Gopher Squad are ordered to capture. They enter his compound, only to discover that he was killed. Information is extracted from his computer which leads the SAS to a weapons factory in the north. The factory is then infiltrated and explosive charges are planted on the factory's supports. Gopher Squad escapes the factory, only to discover the nuke has been transported away. The squad then advances to a cliff overlooking the route of the nuke's transport vehicle, and destroys the tanks protecting it, with a FGM-148 Javelin. The team leaves the area by boat, leaving the nuke to be recovered by a clean-up crew, though it was picked up by Farhad's Insurgents. Then Zach Parker and Warthog Squad are alerted that the nuke has been sighted north of their location. A UAV Recon Drone is sent to survey all possible areas where the nuke could be hidden. The possible locations are lowered to three different areas, which are investigated using a HazMat Robot. The nuke is thought to be at the final location, but it is only large amounts of radiation left behind. Warthog Squad leaves the area in a Humvee found in the third location, heading towards a shipyard, rumored to be the location of the nuke. The team raids the shipyard, checking multiple warehouses, only to find that the nuke is going to be transported away. Warthog Squad fails to recover the nuke, leaving its destination unknown. The SAS receive information that there is an informant named Al-Baq, who knows where the nuke is. The USMC send a squad of tanks to escort Gopher Squad to Al-Baq's location. When the tanks are heavily damaged, Gopher Squad leaves on foot, to Al-Baq's location. They fight their way to an enemy supply area, where they rest there, and continue to his location. When Al-Baq is secured, he reveals the location of the nuke, an oil rig off the coast of an unnamed city. The USMC send in an helicopter to transport Warthog Squad to the city, where they will fight their way to the shore to acquire a boat, as approach by air is too dangerous. Warthog arrives at the oil rig, where they fight their way to the top, only to see a helicopter departing with the nuke. The helicopter is then tracked to a Russian power plant, where an AC-130 gunship protects the advancing Gopher Squad from above. Gopher Squad fights their way to the inside of the power plant, only to find that the nuke is armed. Sgt. O' Neil, manages to deactivate the nuke, protecting all of Russia.

Call of Duty: Modern Warfare: Mobilized features a total of 16 campaign missions. The missions are technically set up in between an American and British campaign. The player will switch between each Military faction according to each mission.

All of the following weapons are available in the campaign and multiplayer, unless specified. 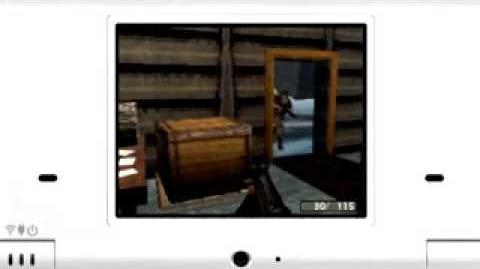