For the track, see Call of Duty: MW3.

"The life you knew before is gone, Today, we fight to bring it back."
— John Price, in the Launch Teaser Trailer

Activision confirmed the title was in pre-production on April 9, 2010[1] and was released on November 8, 2011.[2] Sledgehammer Games, originally planning to work on the canceled action-adventure Call of Duty, worked with Infinity Ward to complete all aspects of Call of Duty: Modern Warfare 3. Raven Software assisted with the user interface and downloadable content, as they have with previous Call of Duty games. The downloadable content was released once a month over a period of nine months. It was free to users of Call of Duty ELITE if they had the Premium version of the service.[3] Sledgehammer was aiming for a bug-free Call of Duty title and ratings above 95%.[4]

Call of Duty: Modern Warfare 3 uses an upgraded IW 4.0 engine, dubbed the "MW3 engine" instead of "IW 5.0" out of courtesy for Sledgehammer Games.[5]

When a massive amount of leaked information was revealed by gaming news site Kotaku on May 13, 2011, Robert Bowling responded in a tweet stating: "A lot of hype & a lot of leaked info on #MW3, some still accurate, some not. To avoid spoiling the experience, I'd wait for the real reveal."[6] Later that day, four teaser trailers for Call of Duty: Modern Warfare 3 were released on Call of Duty's official YouTube channel. Each one revealed a different location: New York, London, Paris, and Berlin.

The full reveal trailer was released on May 23, 2011. The trailer was leaked almost two hours before the scheduled air time, prompting Activision to officially release the reveal trailer earlier than planned. The reveal featured sequences from combat in all four of the previously confirmed locations.

The single player trailer, Redemption, was released on October 7, 2011, revealing bits of the story of the campaign, including the return of Captain Price as he continues his hunt for Makarov.

The Launch Trailer was released on the 21st, labeling "the next chapter in the worldwide phenomenon" as "the most anticipated game in history."

The official site was launched on May 18. The site currently contains an interactive map with the four locations seen in the teaser trailers along with a News column, a collection of screenshots, and videos.

"It doesn't take the most powerful nations on Earth to create the next global conflict. Just the will of a single man."
— Vladimir Makarov

Hours after killing General Shepherd, Captain John Price and Nikolai evacuate a gravely wounded John "Soap" MacTavish to a safehouse run by Nikolai’s allies in Himachal Pradesh, India. While Soap receives medical attention, a large group of men under Vladimir Makarov's command storm the safe-house in an attempt to kill the three. An ex-Spetsnaz operative named Yuri aids Price in giving Soap medical attention and securing a safe route to the extraction point out of the country.

The Russian invasion of the United States continues, culminating in the Battle of Lower Manhattan. A Delta Force team with the call sign “Metal” under the command of Sandman is deployed in New York City to repel the Russian assault along the East River. Team Metal succeeds in destroying a jamming device mounted on the rooftop of the New York Stock Exchange building and escapes on a Black Hawk helicopter. They later assist the U.S. Navy SEALs in boarding a Russian Oscar II to use its ordnance against the Russian Navy. As a result of Team Metal's actions, the Russians withdraw from the East Coast, and presumably the entire United States.

Two months later, Russian President Vorshevsky announces plans to make peace with the United States at a summit in Hamburg, Germany. During the announcement, several men who are loyal to Makarov sabotage the plane. Agents from the Federal Protective Service are able to escort Alena Vorshevsky, Vorshevsky's daughter, out of danger, but Vorshevsky himself is kidnapped.

With Soap largely recovered from his injuries, Yuri gives Price intelligence about an arms deal between Makarov and a militia known as the PRF in Sierra Leone. Task Force 141, now consisting of only Price, Soap, Nikolai, and Yuri, infiltrate a PRF-occupied village where the cargo is supposedly stored, only to find the an empty warehouse. The three push their way to a church in the center of town, but are too late in retrieving the cargo. Coming across a shipping manifest, Price learns that there are three packages that contain chemical weapons being distributed across Europe, meant to be used for assaulting Paris, Berlin, and London. Price covertly informs his former mentor, Captain MacMillan (currently Baseplate of the SAS), of his findings and asks for intelligence as a favor for Pripyat. The intelligence leads Task Force 141 to Waarabe, a warlord in Somalia.

Meanwhile, a French satellite discovers a possible security threat in London, which prompts them to contact the MI6. A British SAS team led by Sergeant Wallcroft is then deployed to prevent the use of one of the chemical weapons in London. They secure the dockyards and pursue the terrorists through the underground metro system. The SAS team destroys a truck suspected to carry the chemical weapons, only to discover it is a decoy. The actual truck carrying the bomb detonates elsewhere in London. Dozens of other chemical attacks are revealed to have been successfully conducted in major cities throughout western Europe. In Hamburg, Team Metal is deployed to rescue the Vice President of the United States, being aided by M1 Abrams tanks in the area, after the Russian military launches a land invasion of Germany immediately following the chemical attacks.

Task Force 141 and Nikolai’s men assault Waarabe's stronghold in Somalia, where they learn from the warlord that he made a physical transaction with a bomb-maker named Volk in Paris. Operating on the intelligence acquired by Price, Team Metal executes a joint operation with the French GIGN to capture Volk. Team Metal is successful in the operation, albeit at the cost of the Eiffel Tower’s destruction. Volk gives up information about a meeting held by Makarov in Prague.

With the aid of Kamarov, Price, Soap, and Yuri infiltrate the city with the intention of assassinating Makarov. Price takes a position in the Hotel Lustig, while Soap and Yuri provide cover from a nearby church. However, the assassination attempt goes awry when Makarov takes Kamarov hostage and reveals that he is aware of Yuri’s alliance with Price and Soap. The church is revealed to be rigged with explosives and detonated, sending Yuri and Soap falling to the ground, while Price barely evades a bomb-laden Kamarov. Yuri survives unhurt, but Soap is wounded. The three take refuge in a nearby resistance safehouse, where Soap succumbs to his wounds after telling Price about Makarov’s knowledge of Yuri. Enraged, Price punches Yuri, causing him to fall down a flight of stairs, and threatens to execute him. Through flashbacks, Yuri describes his role with the Russian Ultranationalists, having been present at Price’s attempted assassination of Zakhaev, the nuclear detonation in the Middle East, and the airport massacre in Moscow. Yuri attempted to prevent the massacre, but was wounded by Makarov and could not help. Price decides to keep his alliance with Yuri, and the two follow up a lead on Makarov’s suspected fortress, provided by Baseplate(Macmillan). Price and Yuri infiltrate the fortress and learn of President Vorshevsky’s captivity, as well as recent intelligence that the President’s daughter is in Berlin. Price and Yuri destroy the base and relay the intelligence to Team Metal. Team Metal acts on Price’s findings and attempts to reach the safehouse where Vorshevsky's daughter has taken refuge, but they are too late to prevent her capture.

A joint rescue operation composed of Task Force 141 and Team Metal - with the exception of Sergeant Derek “Frost” Westbrook - is carried out in a diamond mine in Siberia. The team is successful in saving both of the Vorshevskys, but Sandman and other members of Team Metal are killed as the mine collapses during their extraction. The rescue mission brings about the end of the conflict between the United States and Russia.

With the war over, Price and Yuri track Makarov to the Hotel Oasis in Dubai. They wear Juggernaut armor and are virtually unstoppable until attacked by a helicopter while inside an elevator. Their armor catches fire, forcing them to shed it. They had only four minutes to find Makarov, so the two then head to the restaurant where he was reported to be. A helicopter then fires rockets at them, causing the atrium to begin to collapse. The floor collapses, and Price narrowly escapes falling to his death. After clambering up, he sees that Yuri has been impaled on a metal rod, and he tells Price to go on. Makarov attempts to escape via helicopter, but Price manages to leap onto the helicopter, kill the pilot and copilot, and crash the helicopter on the roof of the hotel. Price and Makarov lunge for a pistol, and Makarov wins the struggle. He prepares to kill Price, but is attacked by Yuri before he can finish the execution. Makarov kills his former ally, giving Price enough time to strangle Makarov with a loose cable. Price then wraps the cable around a beam, pushes Makarov through the glass ceiling of the floor below, and hangs him. Price survives the fall and victoriously lights a cigar while watching Makarov’s swinging corpse. 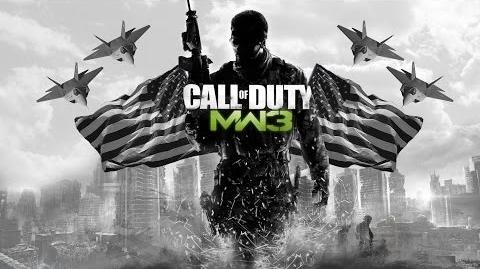 The Multiplayer was revealed to the general public during the Call of Duty XP Event on September 2 and 3, 2011. Attendees were able to experience multiplayer gameplay two months before the game's release.

Every time a player enters Prestige mode they may choose one of the following rewards from the Prestige Shop:

A completely new feature is the addition of a ranking system similar to Multiplayer's. The player earns experience points in Survival and Mission Modes, unlocking new missions for mission mode and new weapons, equipment, perks for Survival Mode.

Survival Mode is a new mode featured in Call of Duty: Modern Warfare 3's Special Ops mode in which players must fend off waves of A.I. controlled enemies on various multiplayer maps.

The waves are randomized, yet increasingly difficult, so that in the later stages of the game, players can expect to face multiple Juggernauts, Dogs and Suicide Bombers strapped with C4 and enemy air support. There is no means of winning in this game mode, as the waves will continue until the player has lost. Like other Special Ops missions, co-op is available for this mode, both online or split-screen.[7]

As part of GAME UK's pre-order special, all pre-order customers receive a "Classified Intel Pack" when they pick up their copy of the game.

The package the contents come in

An SAS operative in the mission "Mind the Gap"

A Delta Force operative underwater in the mission "Hunter Killer"

A pair of Delta Force operators

A player dual wielding in Multiplayer

Wii version.
Add a photo to this gallery

Concept art for Back on the Grid, note the character in front is Captain Price

Concept art for a high rise building in New York

Concept art of "Sandman."
Add a photo to this gallery

3D render of character model
Add a photo to this gallery

Customer Support
Add a photo to this gallery 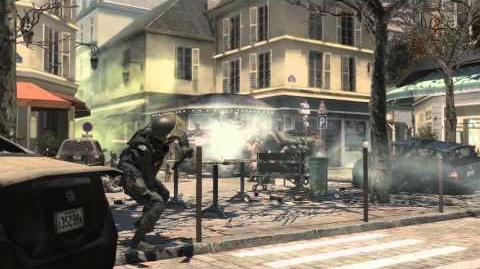 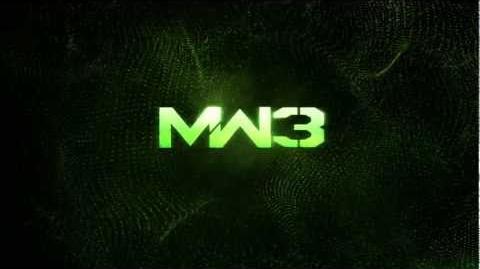 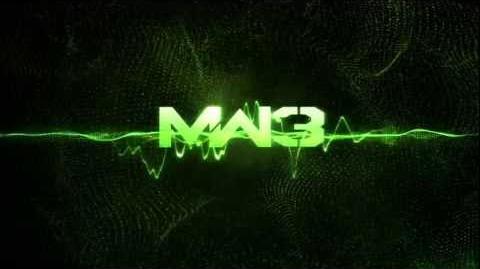 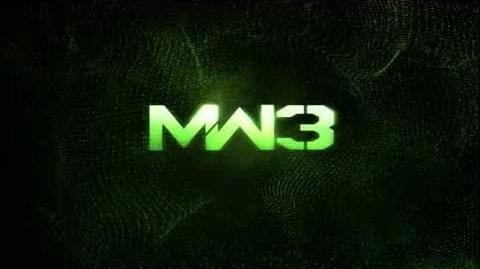 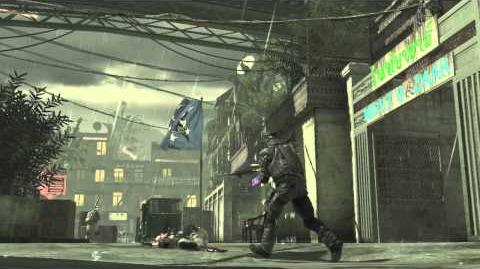 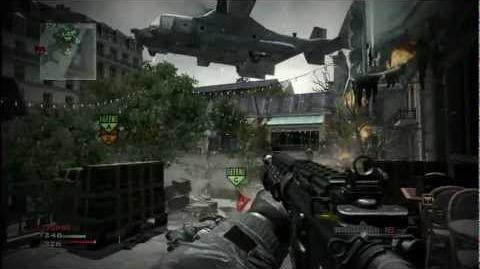 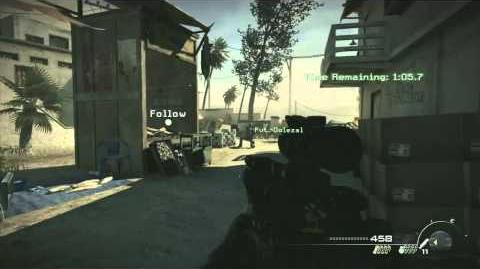 Retrieved from "https://callofduty.fandom.com/wiki/Call_of_Duty:_Modern_Warfare_3?oldid=2475920"
Community content is available under CC-BY-SA unless otherwise noted.