Call of Duty Wiki
Register
Don't have an account?
Sign In
Advertisement
in: Call of Duty 2, Games
English

Call of Duty 2 is a first-person shooter that takes place during World War II, and is the second main installment in the Call of Duty series. It is the sequel to Call of Duty, and was released on October 25, 2005 for PC, November 15, 2005 for Xbox 360, and May 26, 2006 for Mac OS X. It was developed by Infinity Ward and published by Activision. It was re-released in the Call of Duty: The War Collection as part of a bundle.

Lieutenant Dimitri Volsky is the officer who commands the player's platoon in the Soviet campaign. Private Vasili Ivanovich Koslov is the first playable protagonist. Vasili takes part in the Battle of Stalingrad.

Sergeant John Davis is the second playable protagonist. Davis takes part in the British (set in North Africa) campaign, as well as recapturing Caen in the Normandy campaign. Pvt. MacGregor is a hot-tempered, Scottish bearded soldier who fights alongside the player in most British missions. MacGregor is voiced by James Patrick Stuart. Captain Price also returns from Call of Duty, with the 7th Armoured Division. This completely differs from the prequel where he is with the 6th Airborne Division and 3rd SAS and KIA on the Tirpitz off the coast of Hakøya, Norway. In addition to Davis, the player gets the opportunity to play two missions as another British character, David Welsh, a commander of a Crusader Tank in the 7th Armoured Division's campaign in North Africa.

Corporal Bill Taylor of the 2nd Ranger Battalion is the last playable protagonist. Taylor takes part in the Battle of Normandy by destroying artillery and securing Pointe du Hoc, assaulting a farm silo, and assaulting Hill 400. Taylor then takes part in the crossing of the Rhine River. Sergeant Randall is first encountered when he is seen helping Dog Company climb up the ropes on Pointe du Hoc. He leads the player's squad in the American missions. He is promoted to lieutenant by the battalion commander Blake in the final mission, and recommends Taylor for promotion to sergeant. Sgt. Randall is voiced by Nolan North.

The player takes control as a British soldier, Sergeant John Davis of the 7th Armoured Division. The first level has the player in a sneak attack on German troops, ending with the destruction of a valuable German supply station. The next map on the same night has the player defending a crucial town from overwhelming numbers of Germans, finally achieving victory by destroying much of the German tank force using artillery. This is followed by the Second Battle of El Alamein, during which the player has to fight through several trenches, machine gun nests, FlaK 88s, and finally, taking the German's field HQ. The assault on El Daba to intercept the remaining Germans in Egypt and destroy several FlaK 88s soon follows, ending the first British campaign. An addendum to the second set of missions has the player taking on the role of a British Tank Commander, David Welsh. The first mission of the third campaign in Toujane, Tunisia has the player immediately under fire, holding a household with a single machine gun, and then wreaking havoc with an armored car, forced out by mines. They soon break out in a narrow escape and rendezvous with the second squad.

As Corporal Bill Taylor of the 2nd Ranger Battalion, the player starts off by playing a part in D-Day, at the assault of Pointe du Hoc, to destroy a German artillery battery, and hold it against a massive German counteroffensive in the following mission. Soon after, the player captures a nearby town and serves as a sniper against mortar crews until reinforcements arrive. He does so after taking a town in the French Bocage. The second U.S. campaign is focused on Hill 400, involving the capture of Bergstein, a disastrous charge at Hill 400's bunkers, and the defense against the German counterattack. Again, the player performs sniper work against German mortar teams, destroying enemy armor, and generally holding the hill against the counteroffensive, all the while burdened by artillery and overwhelming numbers of German soldiers. The final British mission takes place during the Battle of Normandy for control of Caen.

The final mission is set amongst the Americans in the Rhine River crossing into Germany. It begins as one of the few missions with the player immediately under fire, providing cover fire against the Germans until reaching the river banks, and then fighting throughout most of the town. The final fight has the player defeat two German Tiger I's.

The end credits depict the dramatic rescue of Captain Price from the Germans by a group of American soldiers, probably in the mission "Alps Chateau" in Call of Duty. After the credits end, the statement, "No cows were harmed in the making of this game," appears, as in the original Call of Duty. This is in reference to the dead cattle visible in the Normandy missions.

A Call of Duty 2 PC multiplayer server can hold a maximum of 64 players. On the Xbox 360, the player limit on Xbox Live is eight. There are a total of thirteen official maps and three of these are remakes from the original Call of Duty with numerous other modified maps.

Call of Duty 2 for the Xbox 360 was one of the most popular online games for the console for the first two years of its release.

The maps in Call of Duty 2 vary from Normandy, Africa, and Russia during the winter. There are two teams, the Allies and the Axis, and each team can choose a variety of map-dependent weapons. Depending on the map, the Allies will be American, British, or Soviet.

There are a total of fourteen official maps, and four of these are remakes from the original Call of Duty. There are four different factions that are playable in multiplayer.

German forces, during the Russian campaign.

Spitfires go in on a bombing run during the British North African campaign. 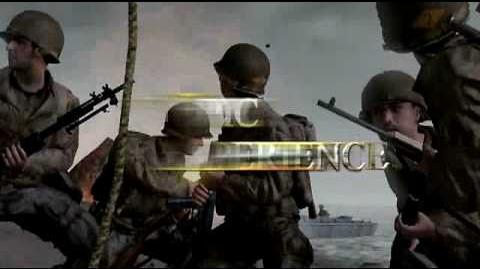