I, Dolten am nominating myself for Adminship.

I have a watchful and nearly constant watch on the War Room, as well as the Recent Changes.

I would help the Wiki greatly with the acquisition of SysOp tools. The largest way being dealing with vandals, they have became more rampant as of late and will continue to do so in the months before and after the release of Black Ops. And for that my friends, we will need more admins for.

Furthermore, I will become more active as fall and winter carry on. Dolten

And that makes it okay? You should know better than that, I don't care if an admin said you could - you still vandalized. --azuris_ 22:24, September 30, 2010 (UTC)
There are admins on here that have vandalized dozens of times and everyone forgets about it, I do it once and I can never live it down. Dolten

Support — Dolten is a well known, and more importantly, a well trusted editor. He vandalsied once yes - but with permission from an admin. Besides, nobody minded. A Lonely Nomad 21:14, September 30, 2010 (UTC)

Strong Support — <Dolten is an amazing editor with no records of vandal or flame. He seems to solve any situation. This editor has a strong knowledge in general (as well as about CoD). I will always look up to him.>

I vandalised the main page once, with an admin request. Dolten

Strong Support — - he sould be a admin becuse he has never been rude or dissrespectful in any way exept when he "Took a shit" on the home page.

@SOGM and ALN: Please revise your votes to actually reflect why you feel that Dolten should be an administrator. Imrlybord7 14:16, October 1, 2010 (UTC)

Strong Support — Dolten has edited here for a long time, I think it is time for him to get SYOP powers.

Neutral leaning towards Support — I'd have supported per nomination, but for CE and Dunn's reasons in the Oppose section -

Neutral leaning towards Oppose — I think that's just what the wiki needs, Shotrocket.

Neutral leaning towards Support — While I do agree with Shotrocket, you are always undoing vandalism and contributing to discussions in the War Room, which kinda outweighs the bias.

Neutral — Your a great editor and everything, but some of the points against you restrict me from voting yes, so i'll keep my vote as Neutral

Neutral — You are a great editor, but your maturity amongst other things is the only thing keeping me neutral, your dedication is admirable and I could see you as an admin in the future, provided you mature a bit. --ukimies {talk | irc | administration} 19:29, October 2, 2010 (UTC)

Neutral — I completely agree with Ukimes. You're a good editor, but you can be mean and insulting at times that don't call for it.

User only has 15 main space edits, ineligible to vote.

Oppose — You have demonstrated the dedication and understanding, but not the maturity. I believe that at some point you will most likely become an admin if you work on your user interaction and debate tactics, provided you don't quit the wiki too many times in the interim (I meant that in a light-hearted way). Imrlybord7 21:20, September 30, 2010 (UTC)

Oppose — Considering the number of green names both here and in the RC, I don't see a need for another administrator at this time. Also, per above and from conversations on the IRC, I'm not sure if you would be the best person for adminship. Ajraddatz Talk 23:46, September 30, 2010 (UTC)

Oppose — Sorry, but you're not THAT active and you constantly threaten to quit Wikia or go inactive.

Oppose — While you are a great editor and contributor, I have seen you use harsh words and at times you can be extremely biased. However, my point below changes my vote to Oppose.

Comment — @Cpl. Dunn: Black Ops is right around the corner, thats why I put this up. Dolten

Comment — Because that simply isn't how adminship works. If you feel that someone would make a good admin, vote support. If not, oppose. If you are neutral, vote neutral. The only time the current number of admins matters is if the current admin team is insufficient to run the wiki. Imrlybord7 21:37, September 30, 2010 (UTC) 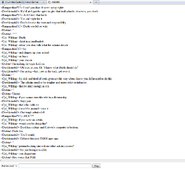 Dolten, you were a huge supporter of that forum. And the fact that you supported it that much made me think that you don't know what actually warrants a block. And you could block someone for a personal/baised reason. --azuris_ 22:15, September 30, 2010 (UTC)

If I had that to do over I wouldn't have supported that. Although if it came up again right now I may think about it. Dolten

Comment — Just to inform everyone, more admins Will be needed. Dolten

Question —
"I have a watchful and nearly constant watch on the War Room," - why does War Room activity make you think you would be a good admin?
"I would help the Wiki greatly with the aquasition of SysOp tools." how so?
Why do you feel more administrators are needed?
What will you do as an administrator? --azuris_ 21:39, September 30, 2010 (UTC)

Comment — CE, it doesn't work that way. You know enough about me to know if I'm ready or not, it would only be a wast of my time to explain why I should be an admin. Dolten

It does work that way, because not everyone knows you enough to see if you are ready for adminship. And you're making it sound like it's just for the hell of it, which it's not - this is supposed to be a very, very, serious discussion. Just because I know why you want to be an admin doesn't mean that everyone does. --azuris_ 22:17, October 8, 2010 (UTC)

You're the only one asking.

And for the hell of it? I thought you were smarter than that. Dolten

Just because he's the only one asking doesn't mean others don't want to know. What you just said demonstrates a lack of control when questioned, and because of that I change my vote to Oppose.

Retrieved from "https://callofduty.fandom.com/wiki/Call_of_Duty_Wiki:Requests_for_Adminship/Dolten?oldid=1943411"
Community content is available under CC-BY-SA unless otherwise noted.