As with every video game, there is extensive math behind Call of Duty, which decides the outcome of gameplay. This article focuses on the game's mechanics.

Sprinting increases the player's movement speed by half of its base value, and all weapons have the same sprint duration except the M14 with ACOG Scope, M21 and the P90 in Call of Duty 4, the USAS 12, MP9 and Skorpion in Call of Duty: Modern Warfare 3 and the Combat Knife in Call of Duty: Black Ops II and Call of Duty: Ghosts.

Movement speed is determined from the player's primary weapon upon spawning.

Movement speed is determined from the player's primary weapon upon spawning, as in Call of Duty 4.

Movement speed is determined from the player's weapon that is currently equipped.

Movement speed is determined from the player's weapon with the lowest mobility. For example, a player using an SMG replacing his secondary with an LMG (either through Overkill or by picking it up from the ground) will move at 80% speed.

The Speed proficiency increases movement speed by 10%, but only when using that weapon, so a player with an LMG with Speed and a secondary will move at 88% when using the LMG and at 80% when using the secondary (unless Speed is aquired through the Specialist bonus).

Movement speed is determined from the currently equipped weapon. For example, if the player is holding an LMG, they will move at 0.9 of the base speed. However, if they switch to a shotgun, pistol, SMG or crossbow, they will move at full speed.

The player's movement speed is based on their currently held weapon.

Supply drop variants:
(Note that the movement while aiming down the sights is unchanged from the base weapons, except for the Bulldog - Breacher where it is decreased to 36%):

All players have unlimited sprint in Multiplayer and all campaign missions (except the level "Black Ops"). Movement speed depends on equipped weapon. Additionally, several weapons in Black Ops III get their movement speed reduced while firing the weapon (be the sights aimed down or not).

Stances are a position that the player's character assumes that has the capacity to affect their movement speed, accuracy, and fire exposure. The three stances have been common to the series since the first game.

A player's health is determined by the game mode being played.

Every weapon in the game deals a set amount of damage. As the range between the player and the target increases, damage is reduced until it reaches a set minimum amount. These charts show each weapons' damages, ranges and reload times, among other things. 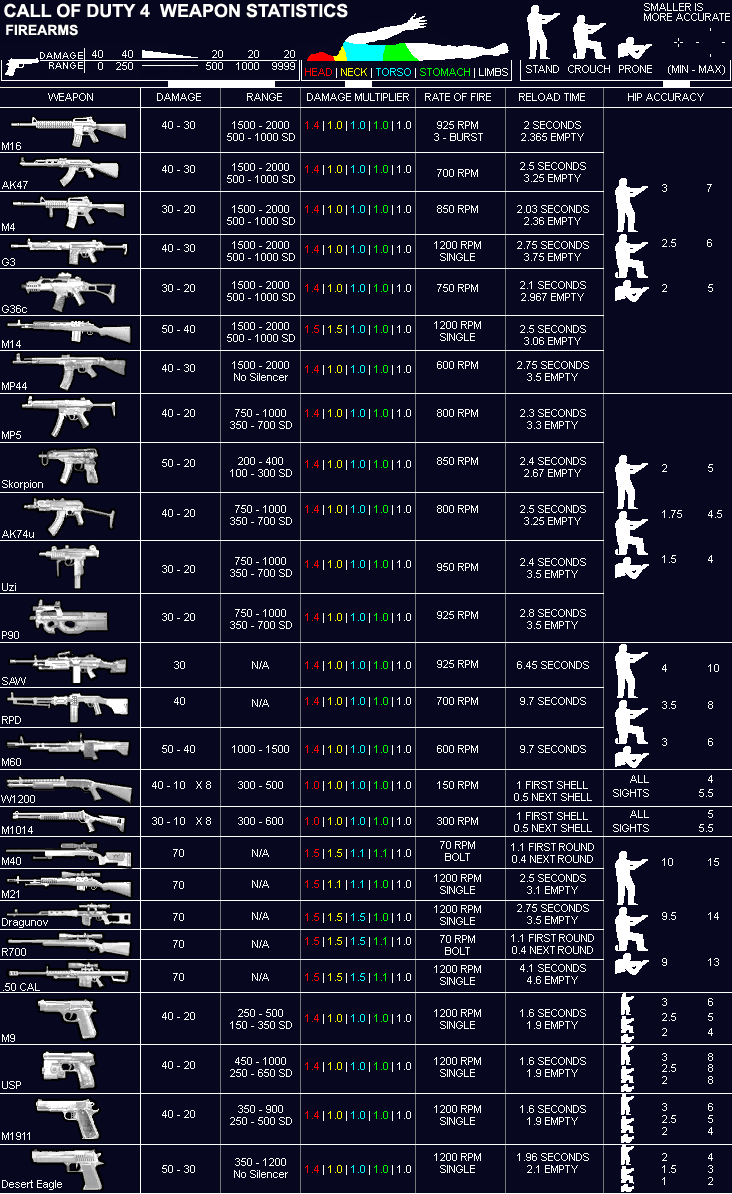 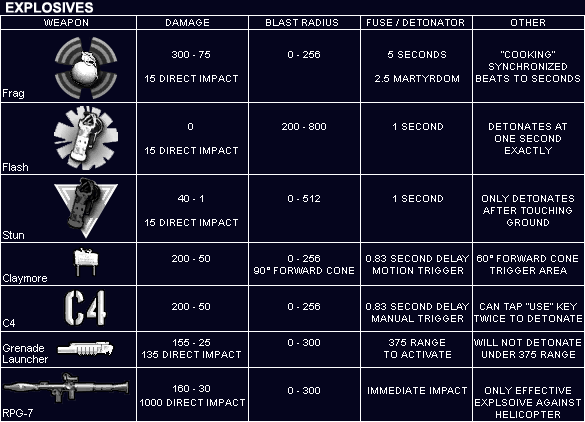 There are many more in depth statistics which determine weapon behavior.

One of the most important things to take note of is that guns in Call of Duty do not shoot projectiles. Instead, they shoot Hitscans, which are perfectly straight, infinitely thin lines that travel at an infinite velocity. All hitscans travel forever except for those fired from shotguns, which disappear at a set distance. This means that all weapons in Call of Duty, excluding weapons that obviously do not use hitscans, such as the RPG-7, and certain weapons in Zombies, are perfectly accurate at an infinite range while aiming down the sights. Misses are caused by idle sway, recoil, misaligned sights, spread, and lag. In Call of Duty: Modern Warfare (2019) however, all weapons use ballistic mechanics as opposed to hitscan for all weapons.

Idle sway is the movement of the weapon's sights without any input from the player. (In Call of Duty: Modern Warfare 3, all weapons now feature idle sway, where as previously only certain weapons had idle sway.) Idle sway is simply determined by two numbers; idle amount and idle speed. Idle amount refers to the radius where the weapon will naturally sway, while speed refers to the speed at which it moves around this area.

Recoil is slightly more complex. Recoil is a combination of two factors; View Kick, Gun Kick. View Kick is determined by five numbers; maximum horizontal, minimum horizontal, maximum vertical, minimum vertical, and center speed. View kick will move the view of your camera when firing a weapon. Gun kick is similar to view kick, in that it has its own horizontal, vertical, and center speed figures which determine it's magnitude of kick. However, unlike view kick, gun kick moves the sights relative to the screen. Each weapon has its own set of numbers.

Every time a shot is fired, the game randomly chooses two numbers, one for vertical recoil and one for horizontal recoil. These numbers will be in between the weapon's maximum and minimum values for each shot. If a number is positive, it is right or up, and if it is negative, it is left or down. Thus, if a weapon has a positive minimum value or a negative maximum value, it will always kick in that direction.

Of note are certain attachments which affect view kick and gun kick. The specific higher magnification scopes (Thermal, Variable Zoom, etc.) will affect gun kick. Because gun kick is the movement of a weapon model, it is entirely removed when aiming down these sights (since there is no weapon model to view). This is not the case in Ghosts, where gun kick will still be applied when aiming down these specific sights. In Ghosts and Advanced Warfare, Rapid Fire will also give an increase in view kick.

Center speed is how fast your view and sights reset between shots. It takes effect immediately upon firing, but during fully automatic fire there is usually too much recoil for the sights to completely re-center after each shot. Low recoil is a result of a high center speed, minimum and maximum numbers having low absolute values and balanced values on all sides, and the weapon's rate of fire.

It should be noted that some attachments (Grip, and various optical attachments) can change Center Speed, leading to a decrease or increase in recoil. This is also the case for Rapid Fire in Black Ops 2, which will decrease Center Speed by 15%.

Time to Kill, usually abbreviated as TTK, is how long a gun takes to kill an enemy from the time the trigger is pulled until the target is dead. In many role-playing games, players use damage per second, or DPS, to determine a weapon's effectiveness. However, in a shooter such as Call of Duty, where everyone has equal health and firefights are very fast, it is far more beneficial to determine TTK than DPS to determine how fast a weapon could kill. However, due to the randomness of all gunfights it becomes an irrelevant factor unless you also calculate the probable misses which makes it a much more tedious process. To calculate a weapon's TTK, all that is needed are damage values and the delay between shots. For example, a gun that fires at 750 RPM has a delay between shots of .08 seconds. If that gun does 30 damage, it takes four shots to kill. The first shot comes out the instant the trigger is pulled, so the formula for determining a weapon's TTK is d(s-1), where d is the delay between shots and s is the number of shots needed to kill. This means that any weapon that kills in one shot will technically kill in zero seconds flat. Because most weapons lose damage over range, it can be necessary to perform multiple TTK calculations for a single gun. Beware that even a few missed shots will greatly increase a weapon's TTK, so it can be beneficial to plug in different amounts of misses using the formula d(s-1+m), where m is the number of misses. Weapons with low recoil are the most likely to actually reflect TTK with no misses.