For the similarly named Zombies Map, see Mob of the Dead.

For the similarly named Zombies Map, see Blood of the Dead.

"A shipwrecked crew of fearless explorers is hopelessly stranded in an abandoned Siberian outpost. Their dream of discovering the true origins of the Element 115 unravels into a hellish nightmare."
— Call of the Dead level description.

Call of the Dead is the ninth Call of Duty: Black Ops Zombies map. Treyarch called it "a unique Zombies experience" and is "a very special creation for all Zombie fans". The level is the first to feature actual celebrities fighting off zombies and features George A. Romero as one of the zombies. Call of the Dead occurs in an abandoned Group 935 Siberian outpost, which features a shipwrecked freighter, a vibrant lighthouse, and a sparse coast.

"It's anchors away for mayhem! In this epic tale of survival inspired by legendary writer and director George A. Romero, a group of four fearless explorers fight for their lives amidst an army of bloodthirsty Russian zombies. The story begins with our heroes stranded in the frozen wastelands of a forgotten Siberian outpost. On the hunt for the origins of the enigmatic Element 115, they head for the site of an ancient meteorite impact crater but their ship mysteriously runs aground. In the midst of a horrific snowstorm, our intrepid adventurers inadvertently unleash an unearthly horde of ravenous Zombies. From the island's deserted lighthouse to a shipwrecked ocean liner and a precarious zip-line in between, it's kill or be killed. And with shiploads of zombie Russian soldiers, scuba divers and sailors that rise out of the frozen ground and icy waters it's not going to be easy, especially considering the deadly surprise that one particular (and somewhat notable) Zombie has in mind."
— Call of the Dead plot summary

Call of the Dead is the sixth largest Zombies map behind Mob of the Dead, Moon, Green Run, Die Rise, and Origins. Players spawn on the shore with up to three other teammates with George A. Romero spawning out of a lightning bolt in a nearby pool of water. There are two chalk weapon outlines there, as with the last three Call of Duty: Black Ops Zombies maps, the Olympia and the M14. Players can choose to open one of two different boats to clear, both costing 750 points. One leads to the lighthouse, and the other leads to the broken ship. The Power Switch is located at the top of the ship, which has the Flinger on the side of the second floor.

A new perk, Deadshot Daiquiri, is located at the very top of the lighthouse, with a price of 1500 points. The Matryoshka Dolls returns from Ascension, alongside a new Wonder Weapon, the V-R11 makes its debut in this map, with the ability to transform Zombies back into humans, with them then running away in fear and committing suicide by throwing themselves in the icy water (or killed by the player), along with the ability to calm George (temporary) and to make teammates do infinite damage and not be harmed by zombies. The subject who was shot by the V-R11 can also cause a distraction among the zombies and George Romero, thus the subject can be killed by the horde or George Romero. Another new wonder weapon is the Scavenger; a bolt-action sniper rifle that shoots explosive bolts dealing very high damage. When Pack-a-punched, the Scavenger becomes the Hyena Infra-Dead, dealing even more damage, including a higher radius of splash damage. The Hyena Infra-Dead also has a thermal scope.

When George A. Romero appears at the first round he appears in a "calm state", slowly walking towards the player while shouting threats. He also appears to have an extremely high amount of health, 250,000 per player in the game (i.e. he has 250,000 health in solo, 500,000 with two players etc.). Damaging him or allowing him to hit a player triggers his "Berserk Mode", causing him to first shout and then chase the nearest player wildly attacking and spontaneously roaring and growling. He calms down if he is lured back into water. The player gets 10 points for shooting him when he is calm and out of the water. However, doing so will anger him. Contrary to popular belief, the V-R11 does not turn George A. Romero back into a human, only managing to turn him back into his "Calm State" for a period of time. Using the Pack-a-Punched V-R11 on him while he is mad will turn him back into his Calm State until he is provoked again in the water which makes him disappear for a limited amount of time, after which he comes back. The players can kill George, though doing so will take time and effort. One of the best ways to kill George is with the Hyena Infra-Dead or a players weapon of choice. After defeat, the players are rewarded with a Random Perk Bottle and a Death Machine (or a Lightning Bolt in certain circumstances), and George will go back into water for the current and the following round. He then comes back in a random pool with full health.

The map also features the "Stand-in" and "Ensemble Cast" easter eggs. The easter egg consists of the original characters trapped in a small dark room, after Richtofen apparently influenced the Casimir Mechanism to teleport all of them to this Siberian outpost. Richtofen exclaims that they were sent too far into the future during the easter egg. Freeing the original characters serves as the map's major easter egg and gives the Lightning Bolt Power-up, granting the player a Wunderwaffe DG-2. Having no further need for it, Richtofen leaves it for the celebrities.

Zombies can also become electrified, causing a slight blue aura around them and an electric pulse to encircle them. These special types appear once George hits his spotlight on the ground or yells (which causes sprinters as well). If the player is attacked by an electrified zombie, their movement will be momentarily slowed and an electric shock will go across the screen (much like being hit by George's spotlight or going through an electric trap).

Deadshot Daiquiri is a perk introduced in Call of the Dead and later featured in Shangri-La, Moon, Mob of the Dead, Origins, The Giant, Der Eisendrache, Zetsubou No Shima, Gorod Krovi and Revelations. The perk's icon consists of a black background color with the foreground being a head in front of a set of cross-hairs. The perk works in three different ways: it makes the cross-hairs smaller identically as Steady Aim, making sniper rifles have no idle sway and it works as improved aim assist; when the player would aim down the sights while looking near the zombie, it would lock to the head of the zombie, instead of chest. In PC, it only increases hip-fire accuracy similar to Steady Aim.

Main article: Call of the Dead/Radios

There are a total of three hidden rocks around the map

Main article: Not Ready to Die

Send The Crew To ParadiseEdit

The poster of A7X dressed in what looks like soviet uniforms can be found behind the generator on the small section of wall in the room where the door is located for the Stand-in Easter Egg, from left to right they are: M. Shadows, Zacky Vengeance, Synyster Gates, Johnny Christ and deceased drummer The Rev.[1]

Call of the Dead was released via an update for Call of Duty: Black Ops Zombies on July 19, 2012. It is now called Call of the Dead: Director's Cut. Instead of featuring the celebrities that are on the original map, it features Tank Dempsey, Nikolai Belinski, Takeo Masaki, and Edward Richtofen, because of this, the Stand-in Easter Egg has been removed. The map has also been changed slightly.

Main article: Call of the Dead/Quotes

A poster for Call of the Dead.

Caption from the promo poster.

Opening scene of the Call of the Dead intro.

The Scavenger and its explosion.

A picture of the map itself.

Combat in the lighthouse.

Carnage on the Ship. 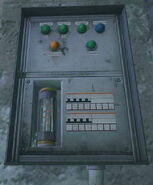 The power box in the Stand-in Easter Egg.

The submarine activated by the lighthouse's green light.

Call of the Dead photo in Der Riese.

Call of the Dead level selection.

An explosion caused from the Hyena Infra-dead.
Add a photo to this gallery 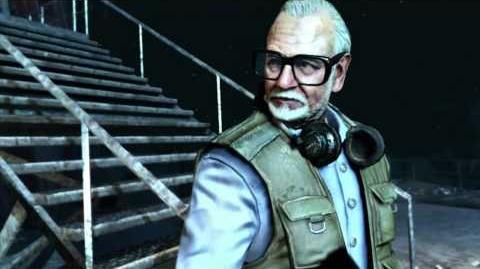 Call of the Dead Intro and Outro
The intro and outro. 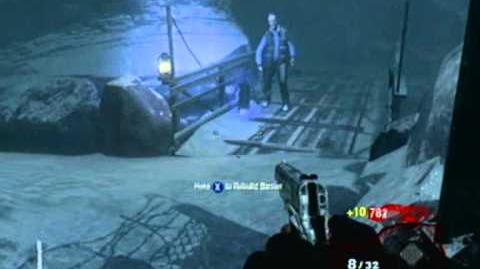 CoD Black Ops Call of The Dead Gameplay Solo
Gameplay.
Add a photo to this gallery

Retrieved from "https://callofduty.fandom.com/wiki/Call_of_the_Dead?oldid=2486733"
Community content is available under CC-BY-SA unless otherwise noted.