Call of Duty Wiki
Register
Don't have an account?
Sign In
Advertisement
in: Call of Duty: Black Ops Tactical Equipment

For the device used in Call of Duty: Ghosts' campaign, see Camera.

"Remote camera view that is toggled on and off with "equipment" button."
— Create-a-Class 2.0 description

The Camera Spike is an equipment item featured in Call of Duty: Black Ops, costing

The Camera Spike allows the player to see anything in front of it using thermal imaging in a box at the top left corner of the player's HUD, replacing the mini-map. To the contrary of what has been shown in gameplay footage, the mini map is not permanently replaced by the camera feed and can be toggled by pressing the equipment button. The area that the camera covers is dictated by the player's facing (both horizontal and vertical) when it is placed. The camera spike can be destroyed by melee or bullets. If the player is dissatisfied with the placement of the Camera Spike, it can be picked up and replaced somewhere else, and unlike turrets, is simply placed back into the player's inventory.

The Camera Spike is very useful for players that want to watch a specific choke point or path to a key position. Players of all types will show up on the image when passing by the camera's picture, with no perk granting immunity to the Camera Spike. In that regard, the Camera Spike seems rather foolproof. However, the Camera Spike is heavily dependent on wise placement by the player, in addition to not completely discarding the mini-map when the Camera Spike is in use. The Camera Spike can be temporarily disabled either by a Jammer or a Concussion or Flashbang. Camera Spikes are also capable of being overrided by someone using Hacker Pro, and they can simply be destroyed. Hacker users can be particularly annoying to Camera Spike user, as the Hacker user can see the Camera Spike through the wall, and plan accordingly to pass around the Camera undetected, or simply destroy it through a wall.

A Camera Spike in Create-A-Class 2.0 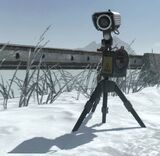 Render of the Camera Spike's model. Note the spike. 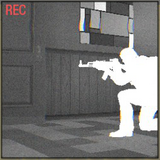 View through the Camera Spike.