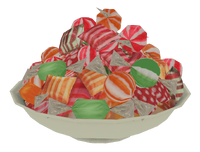 Candy is an item found in the Zombies map Buried.

Candy is a very useful item as it can be fed to Arthur which allows for a number of uses:

Candy will always spawn in the Candy Store which will cost the player either 750 points or 1250 point to enter. The Candy has several spawning locations inside the Candy Store which includes the barrel in the window, the barrel opposite the counter and the barrel next to the rear door. If candy has been used in one round, players have the option to buy candy for 1000 points at the cash register if they need to.