The Carcano M1938 is an Italian bolt-action rifle featured in Call of Duty 2: Big Red One, and briefly seen in a trailer of Call of Duty: Black Ops. It was standard issue to Royal Italian Army troops during World War II.

"Based on a design dating back to 1891, a similar Italian rifle was linked to the JFK assassination in 1963. Bolt-action, 7.35mm caliber 6-round clip."
— Description

The Carcano M1938 (referred to as Carcano M38 in the Bonus Materials) appears briefly in the campaign mission "Operation Husky", but cannot be used by the player. It is later seen once again in the campaign mission "Piano Lupo", in which it can be picked up and used. Ammunition is commonly available in "Piano Lupo", making it a good weapon to pick up, rather than keeping the starting weapons. Like other bolt-action rifles in the game, it will kill an enemy with one shot to the upper body. 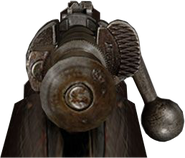 The iron sights of the Carcano M1938

A National Archives file photo of the Carcano that was used to assassinate President Kennedy is seen very briefly in the Call of Duty: Black Ops teaser trailer, with the words "Lee Harvey Oswald" in the bottom right corner of the screen. However, it is never actually used, or seen in the final game. It was most likely put in for dramatic effect, because of the speculation of Mason's role in the Kennedy assassination.

The Carcano in the teaser trailer