In all games, the Care Package will drop a random killstreak/Strike Chain/scorestreak; Modern Warfare 2 and Black Ops Care Packages also give ammo drops.

When obtained the player will throw down a smoke grenade (usually a different colour model for the grenade, along with the smoke being red or blue) After a few seconds a helicopter (or other aerial vehicle) will drop the care package on the area where the flare was. The random kill/score streak will appear as it's menu icon on top of the care package.

care_package
This crate can contain either a full ammo restock or a killstreak other than the Emergency Airdrop, Tactical Nuke or another Care Package. Care Packages are dropped on by an OH-6 "Little bird" Helicopter. This helicopter can be shot down before dropping the care package, although it's relatively difficult to do so, causing the care package to drop instantly. If the helicopter is blown up outside of the map, the care package will be uncapturable by anybody. Maps like Wasteland are perfect for this. (If the care package lands close to the radiation boundary, it still might be possible to capture it)

There were initially two major glitches with airdrop-based killstreak rewards. While holding the Care Package, players would receive a large increase in movement speed, as well as a 25% health boost, which was often combined with Marathon, Lightweight, and Commando for extremely fast knifing classes. The other glitch allowed players to have infinite Care Packages to continuously call in whichever Care Package based killstreak reward they had. A patch to fix the problems was finally released on PC and PS3 on January 29, and on Xbox 360 on February 12.

The probability of any given item is as follows:[1]

As seen in the multiplayer reveal, the Care Package now gives the user high powered weapons in addition to Killstreaks, which could be a Grim Reaper or a Death Machine. Furthermore, with the effect of Hardline Pro, players have a chance to receive another randomized reward if they are dissatisfied with the initial Care Package. However, this isn't without risk: the player could get a worse reward the second time, or alternatively enemy players may have enough time to get to the players location and kill them before they get a chance to claim the Care Package. Thus the enemy can possibly steal the contents.

As with all other helicopter-based killstreaks in Call of Duty: Black Ops, the CH-47's paint scheme will vary depending on whether it belongs to friendly or hostile forces. Friendly CH-47s are painted in the typical U.S. Military gray scheme, while enemies are painted with gray camouflage and red markings. The crates themselves also differ in appearance. Friendly crates appear green, enemy crates are red, and enemy crates that have been stolen and booby-trapped by a player with Hacker Pro will appear black with red skull and cross-bones markings to that player and any teammates. A useful strategy is to pair it with a Counter-Spy Plane, as it can protect it from the enemies who wish to steal the crate. An additional feature with the Care Package is that one can kill someone either with the flare itself, or with the falling care package, although it is very hard to do so.

The Care Package in the killstreaks menu.

Selecting the Care Package in the Killstreaks selection menu.

Care Package in-game.
Add a photo to this gallery

The Care Package appears in Call of Duty: Black Ops: Declassified in both multiplayer and Hostiles. It can drop any killstreak except another Care Package.

Level 7
The Care Package returns in Call of Duty: Black Ops II and functions similarly to previous titles but, similar to its Modern Warfare 3 counterpart, will not yield ammunition. The Care Package requires a scorestreak of 550.

Unlike the original Black Ops, there are no Care Package-exclusive scorestreaks (the Death Machine is now an actual scorestreak). It can be hacked with the Black Hat PDA by the user - to capture it from a distance, by your own team - to capture it in the same fashion (although slower), or by the opponent - Engineer can be used to booby trap it (the scorestreak rerolls, however when opened by the team whose care package it originally was it will make a Semtex-like sound and explode).

The Care Package returns in Call of Duty Online, unchanged from Call of Duty: Modern Warfare 2 except that it requires 5 kills instead of 4.

The following rewards can be obtained from a Care Package in Call of Duty Online:

The Care Package marker is used on the pointstreaks Maniac and Juggernaut and is granted to players who have completed a Field Order. One can also be obtained by breaching the over-turned shipping container in the map Octane. This care package will contain support pointstreaks ranging from Sat Com through to Ground Jammer, it can also sometimes be an I.M.S. The care package in Ghosts has a much different appearance than in the previous Call of Duty games. It also takes a couple more seconds to drop than in previous titles. Unlike previous titles, there are two different types of Care Packages: Assault and Support. Assault care packages are unlocked through either Field Orders or the LOKI, where Support Care Packages can only come from the ODIN. Up to three care packages can be dropped from either of these. Since the return of Drop Zone, Care Packages can carry anything from either class of pointstreaks only in this game mode.

The Care Package is a Hero Skill for Soap and Harper. It sends in a support package that heals and repairs allied units within its area of effect for 5 seconds. It has a healing rate of 60 per second, a performing range of 6 tiles, and effect range of 7.

No
The Care Package returns in Call of Duty: Black Ops III. The player no longer throws a smoke marker, but instead simply selects a spot on the ground where they want the Care Package to drop. A ship deploys the package, which hovers slowly to the ground.

The Care Package returns in Call of Duty: WWII.

Inside Care Packages, the only scorestreaks unable to be earned from the care package are the Molotov Cocktail and the V2 Rocket.

In the December 7th, 2017 update, players who teamkill in Hardcore modes are unable to take the killed player's Care Package.[2]

No
The Care Package returns in Black Ops 4, though it once again uses a smoke grenade to signal the drop point. They are once again dropped by aircraft.

"Call in a care package containing one random scorestreak."
— Description

The Care Package return in Call of Duty: Mobile and functions similarly to previous titles.

Care Package during 1st Anniversary Update in Season 11.
Add a photo to this gallery

"Call in a random killstreak Care Package to your location."
— Description

The Care Package returns  in Call of Duty: Modern Warfare and behaves similarly to other games. The Care Package is called in with a smoke grenade and is dropped by a OH-6 "Little bird" Helicopter which cannot be shot down. Care Packages in Modern Warfare are unique in that they do not indicate their contents to either team. There is no way to reroll them, or booby trap them, and the only way to know what is inside them is to interact with them. Care Packages in Modern Warfare react to bullets and explosions. One being shot at cannot be opened. If the care package is hit with a rocket from a rocket launcher while it is being dropped from the Little Bird, it will be launched very far away, oftentimes out of map boundaries. Ajuggernaut obtained from a care package does not need to be called in again, as it will activate straight from the care package.

The Care Package will release a killstreak for the player's use, similar to any other definite reward, and shooting down the delivery copter will only serve to drop the contents immediately. A falling Care Package will kill any enemy.

Because the Care Package essentially contains a 'random' reward, players are basically gambling with their chances, and 'low end' killstreaks are a lot more common than 'high end' items. The very act of throwing an air support marker may alert enemies due to the smoke. Players from the same team can be killed with a dropping crate. When acquired, kills with the kill streak will not count for the next one. Scorestreaks obtained from packages however, will count for future scorestreak points. Thus, some players might find it easier to select the higher-tier killstreaks they want instead of risking using a Care Package and getting a "bad" killstreak like the UAV or RC-XD. 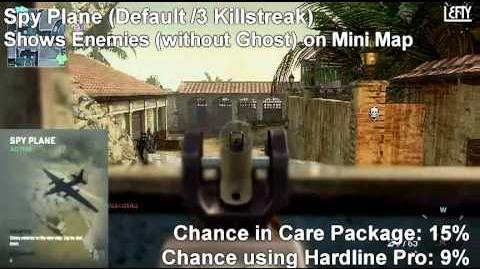 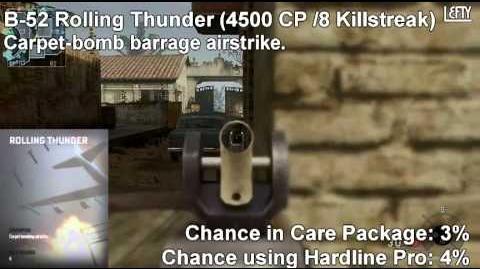 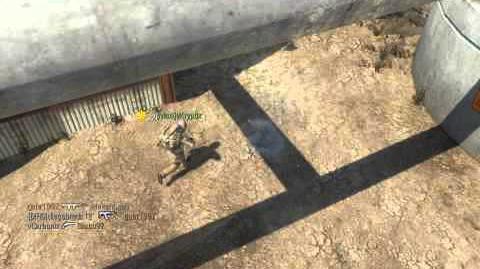 The Care Package being dropped in Black Ops.

The player acquires the "Rolling Thunder" killstreak in a Care Package.

The Care Package marker in Black Ops after having been thrown.

An unused killstreak icon for the Care Package in Modern Warfare 3.

A Care Package delivery in Modern Warfare 3.
Add a photo to this gallery

Retrieved from "https://callofduty.fandom.com/wiki/Care_Package?oldid=2528173"
Community content is available under CC-BY-SA unless otherwise noted.