Carnival is a large multiplayer map available in the Resurgence Pack DLC for Call of Duty: Modern Warfare 2. It takes place in São Paulo, Brazil, in an abandoned carnival.

Carnival returns in Call of Duty Online, and is only available in the Spring Festival. The map style changes each year, relative to the Chinese zodiac of that year.

This map takes place in an abandoned theme park, and the grounds surrounding its perimeter. It consists of a funhouse, a castle, a rollercoaster, a ferris wheel, many usual rides and stands seen at a typical theme park.

This map is mostly suited for long-range combat. Within the map, there are about five vantage points that overlook the carnival, such as the window on the second floor of the funhouse, and the tall rocket-shaped tower near flag C in Domination. The large house and area with the B flag near it are usually the areas with most traffic, but the area between C and A flags is also a common firefight area.

The bumper cars castle is suited for medium to close-range firefights, as there is a vast courtyard with many obstacles in it that allows for more tense CQB gameplay. The balcony of the castle also provides access to a vantage point overlooking the Southeast side of the map, and can jump onto a platform nearby above the bumper cars area, to surprise enemies by raining fire from above.

Exiting the castle will lead you to the merry-go-round and vending stalls area, which again allows for tense, close-quarter firefights. The passageway between the root beer stall allows one to take cover and engage enemies in front of the funhouse.

The "World of Tomorrow" area of the carnival features medium to long-range gameplay, again. When entering, it already provides of vast range and view of the area around it. There is a rocket structure in the middle of the area that provides access to a higher platform. This overlooks the vending stalls and merry-go-round area, and snipers can get an edge off this area. There is also a big, lunar-lander food stall nearby, and toilets which are in turn, nearby the lunar lander, which allows you to take a break and operate your Predator Missile or AC-130 in peace. The tilted structure, dubbed the Crushinator, provides a good overlook of the interior of this area, and allows for easy picking off of enemies with an assault rifle or sniper rifle.

Finally, the funhouse beside the entrance of the roller coaster consists of short-range gun battles. The many obstacles inside make it hard for one to get an accurate shot, leading to intense CQB.

Due to the combat balancing between medium to short range combat, an assault rifle or a LMG is useful. Shotguns are also good for assaulting any positions the enemy holds. It is a popular map for Domination.

A view of the one of the vantage points, the rocket.

The view from another vantage point, the second floor of the castle.

The teddy bear easter egg, which can be found in a drain near the castle moat. 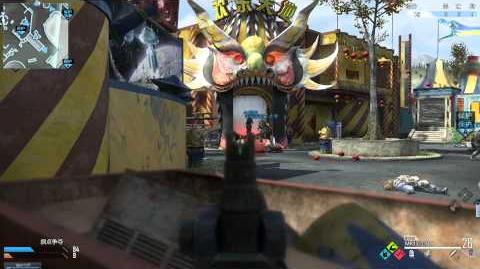