"I'm Captain Butcher of the SOE. Well, retired Captain Butcher these days. I was in charge of the SOE during the war. Ever heard of Vanguard?"
— Butcher, to Russell Adler, Jason Hudson, Frank Woods and Alex Mason.

During Butcher's service with the British Army in 1943, he fought with the 78th Infantry Division upon the docks of Termoli for Operation Devon, where he battled against the 16th Panzer Division. During this battle, he succumbed to injuries upon his face due to exploded shrapnel, leading to his dismissal to the Headquarters as the Quartermaster during the winter.

After hosting as the Quartermaster during the winter, Butcher was sent back to the front lines for service, upon which he witnessed resistance fighters in action.[1] To his own disapproval however, he was reassigned to the Quartermaster position during an event to strengthen the resistance movements across Europe.

In 1944, Butcher travels to Wilczek Land to find Polina Petrova, who was stationed to terminate all Nazi threats. Petrova, who is wary of Butcher's appearance, follows him to the docks, where they take out a Nazi convoy from afar. Butcher points his gun at Petrova's head, prompting her to stop temporarily, in order to lure out a commander. They then take him out along with the rest of the convoy. Butcher then leaves, while promising Petrova her "revenge" should she decide to join up with the Special Operations Executive.

Some time later, Butcher arrives at Novi Sad, Serbia where Milos Novak is stationed with the Wehrmacht under the disguise of "Jan Zima". Using a secret code phase, Butcher makes contact with Novak and attempts to recruit him, intending to leverage his knowledge of secret Nazi intel regarding Project Phoenix. Though wary at first, Novak agrees to join Butcher's cause after he finishes his undercover assignment.

At some point in 1944, Butcher flies a plane out to the British Solomon Islands, where he meets Wade Jackson and his wingman, Mateo Hernandez. He asks the former to join his secret operation, but Jackson refuses, stating his disdain for the covert nature of the mission. Butcher initially decides to move on, but changes his mind after Hernandez convinces him to take Jackson. The two of them leave the island on Jackson's plane.

At another point, Butcher deliberately gets himself arrested in order to meet Lucas Riggs. Riggs refused to speak to Butcher, citing his hatred of the British and also under the belief that he was there to kill him under orders from Henry Hamms. Butcher attempted to appeal to him, stating that he shouldn't rot away in prison over punching his superior. Riggs still did not want to join, so Butcher bid him luck on his court martial, saying "accepting their punishment means they win." After sleeping through the night, Butcher wakes up to find out that Riggs had a key pocketed the whole time. Riggs and Butcher make their way to the cafeteria, where they assault the guards and blow up a wall to escape.

Finally, after having recruited Petrova, Jackson, Riggs and Novak, Butcher sets his sight on Arthur Kingsley, who was occupied with protecting his unit from an enemy assault. Butcher clears out a group of enemies surrounding the church Kingsley's unit was in, then barges in the front door asking for Kingsley. After explaining himself, Butcher attempts to convince Kingsley to leave his men behind, in order to join up with his task force. Kingsley denies his offer, putting the safety of his men above Butcher's mission. Butcher then leaves, asking Kingsley to look for him should he survive. Kingsley eventually meets with Butcher again, joining Vanguard alongside his right hand man Richard Webb.

Eventually, with Task Force Vanguard assembled, Butcher provides them with their first assignment: to head to Hamburg, Germany and infiltrate a Nazi base, in search of intel regarding Project Phoenix. At the time, however, the task force was not given details on what the project was about. The task force would eventually succeed in their mission and stop Project Phoenix's leader, Hermann Freisinger; though Novak and Webb were killed.

The Birth of Special Forces

After the mission in Berlin, Butcher assigns Kingsley, Petrova, Jackson and Riggs leadership of their own task force units, as he continues to oversee the recruitment and training of several elite Allied soldiers and Axis defectors.

Some times prior to Vanguard's deployment in Berlin, Butcher recruits three soldiers: Francis Lanakila, Lewis Howard and Isabella Reyes to form Task Force Trident. In December 1944, Butcher deploys Trident to Caldera in search of secret Nazi activity. Their plane is shot down by anti-air, forcing the Trident operators to exfil, while Butcher crashes the plane at a nearby beach. While Trident attempts to navigate the island, Butcher stumbles upon a Nazi bunker near the beach.

Intel recovered from Caldera reveals that the Nazis were working on a new chemical weapon, named "Nebula V". Some times later, Butcher travels to the Swiss Alps with Task Force Yeti: Anna Drake, Thomas Bolt and Gustavo dos Santos to recover Nebula V from a Nazi fortress. The task force finds the weapon, but is unable to stop the Nazi commander from activating it, releasing lethal gas that engulfs the fortress. Task Force Yeti escapes with Butcher in a tank.

In the aftermath of Nebula V attacks across the globe by the Nazis, Butcher sent Task Force Harpy to Caldera to intercept arms held by the Nazis. After dealing with the Nazi forces on the island, the task force finds out that the Nebula V attacks set by the Nazi remnants caused enormous Titans to awaken and cause chaos across Caldera.

In 1984, a retired Butcher visits an underground Nazi bunker in Verdansk, following the destruction that left much of the city in ruins. Afterwards, he is encountered by Russell Adler, Alex Mason, Jason Hudson and Frank Woods, who demand him to introduce himself. Butcher reveals his association with the SOE, as well as his role as the founder of Task Force Vanguard. He then begins to tell the four the story of the hunt for what was left of the Reich, starting on Caldera.

Carver Butcher appears in Call of Duty: Mobile and was added during Season 9 Conquest, as part of "Quartermaster crate".

In addition to the seasonal cinematics, Butcher also appears in Warzone as the announcer for all game modes, replacing the SAS Team Leader following the Pacific update. 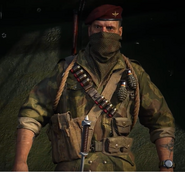 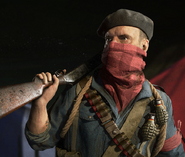 Butcher during the Resistance event.

Butcher during the Shamrock & Awe event.

Butcher during the Blitzkrieg event.

Butcher during the Attack of the Undead event. 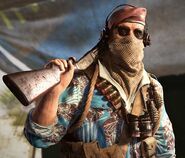 Butcher during the Days of Summer event.

Butcher flying a C-47 over Caldera.

Butcher after scaling the mountain to the Nebula V Factory with Task Force Yeti.

Butcher sneaking behind a Wehrmacht Soldier.

Butcher signaling Yeti to get in the Panzer IV.

Butcher tells the NATO operators to stand down, stating that they're on the same side.

As Butcher explains how he created Vanguard, he takes a look at a map.

Butcher looking at islands in the Pacific.