Call of Duty Wiki
Register
Don't have an account?
Sign In
Advertisement
in: Call of Duty: Black Ops 4 Zombies Characters

"Ever seen a child die? Sure you have, cowboy. You killed your share among the Cheyenne. Both of us have done things we're not proud of -- but it's that kind of world, isn't it?"
— Catherine

Catherine (also known as Ghost) is a character featured in the Chaos story of Treyarch's Zombies mode. She appears as a ghost in the map Dead of the Night from Call of Duty: Black Ops 4.

Catherine is a serial killer. She married a man named James Dixon. At one point, she told Mrs Soames that James and she were siblings so she could rent them a room, she later killed both her husband and Mrs Soames using Colchicum.

Catherine later met a retired sea captain, named Mawer. After Mawer put her into his will, she killed him to receive the money.

One day in 1862, a chambermaid named Olivia found a bottle of Colchicum inside a rag doll. Catherine killed Olivia and a footman was accused of the murder. But seven bodies were later exhumed and Catherine was arrested.

She was prosecuted by Mr. Clark and Mr. Beasely before the judge Mr. Justice Byles. Lord Cornelius spoke for her during her trial to no avail. Ultimately, she was publicly hanged at the Newgate Prison. Her spirit went back to haunt the mansion.

In 1912, Alistair Rhodes, now the owner of the mansion renamed Rhodes Manor, was preparing a party but was abducted by The Order whose members activated a Sentinel Artifact. During the trial, Catherine's spirit manifested and helped three guests and Alistair's butler to complete it.

After unlocking the Pack-a-Punch, if players are looking several times in a row into one of the seer stones they can witness a vision of a tortured Catherine with her neck partly severed. 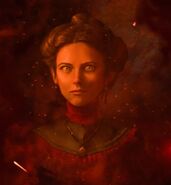 Catherine as a jumpscare.

Olivia finding the bottle of Colchicum.

Catherine being hanged.
Community content is available under CC-BY-SA unless otherwise noted.
Advertisement