Call of Duty Wiki
Register
Don't have an account?
Sign In
Advertisement
in: Call of Duty: Black Ops II Factions

"We must all do whatever it takes to ensure our future as a species."
— CDC Director George Barkley.

The Center for Disease Control (CDC) are a faction in the Call of Duty: Black Ops II Zombies game modes Survival, Grief and Turned. One of the agents is playable in Call of Duty: Black Ops's Dead Ops Arcade. They also are mentioned in Call of Duty: Advanced Warfare. The faction is run by the US Government. In Grief, they oppose the CIA (also run by the US Government) and try to outlive them. The CDC wear bright yellow hazmat suits and gas masks. Their first-person-hand models are identical to Hudson's hand model from Rebirth Island, with black gloves and yellow sleeves, as well as Edward Richtofen's first-person-hand model.

In the Zombies mode of Call of Duty: Black Ops II there are no heard quotes or communication between the four operatives. It is mentioned later in the campaign of Call of Duty: Advanced Warfare during the cutscene of the mission "Aftermath", the CDC orders an evacuation of all non-essential personnel within a five mile radius of downtown Detroit.

In Black Ops II, according to former assistant director George Barkley, his facility in Virginia was destroyed following the destruction of Earth. However, it was still able to operate for a short time after the missiles hit[1], and discovered that Element 115 was contaminating the air and atmosphere. As such, after presumably escaping the ruins with a group of CDC personnel, Barkley was forced to euthanise fourteen members of his own team, as they displayed symptoms of the infection. 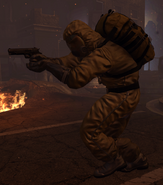 One CDC agent as seen in Town.

A CDC agent as seen in the Nuketown Zombies trailer.

A squad of CDC agents reload, prepping to fight the undead.