For the dogs on Mob of the Dead, see Cerberus.

Part of the Hound family of ground robots, the Cerberus appears infrequently in the campaign, often overshadowed by the presence of Hound and ORTHRUS units. It is an updated version of the Hound that features improved artificial intelligence and greater battlefield endurance.

A poor rotation and overall movement speed result in this scorestreak suffering from a lack of mobility which can render it almost useless on larger maps, particularly in game modes which don't have set side spawns.

This scorestreak is rather weak when AI controlled, so it is recommended to control it manually. Attempting to drive the Cerberus underwater will instantly destroy it, so care should be taken when driving near a body of water. 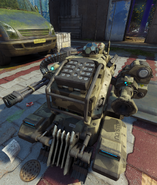 An enemy Cerberus.
Community content is available under CC-BY-SA unless otherwise noted.
Advertisement