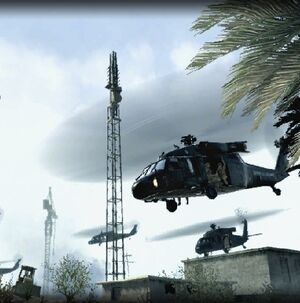 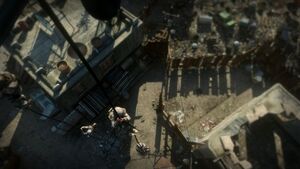 Blackout (in-game)
Death From Above (chronologically)

"We have intel that puts Al-Asad in a building at the west end of town. Infiltrate and extract the target. It's time to bring him in."
— Call of Duty: Modern Warfare Remastered level description

"Marines! Spotters have a possible fix on Khaled Al-Asad in a building at the West end of this town! We're gonna secure the perimeter and grab Al-Asad. Oorah? Lock and load!"
— Lt. Vasquez

"Charlie Don't Surf" is the fifth mission in Call of Duty 4: Modern Warfare and Call of Duty: Modern Warfare Remastered. Giving the player control of USMC Sergeant Paul Jackson for the first time in the game, this mission sees Jackson and the 1st Force Recon Marines involved in a hard-hitting raid against an Arabian coastal town in order to capture Khaled Al-Asad.

Reacting swiftly to the death of President Yasir Al-Fulani at the hands of Al-Asad, the U.S. Department of Defense decides to launch an invasion in hopes of restoring order to the area and removing Al-Asad from power. A large fleet of aircraft carriers, Amphibious Assault Ships and other Navy ships stationed in the Persian Gulf deploys thousands of United States Marines, including the 1st Force Reconnaissance Company, to a small coastal Gulf town, via Black Hawk helicopters. According to US Military Intelligence and Marine Spotters, Al-Asad is broadcasting propaganda from a radio station on the west side of the town. Flying through anti-aircraft and RPG-7 fire, the Black Hawk helicopters manage to deploy the Marines about 60 yards from the target building, who fast-rope down and proceed towards the HQ building. The back door is breached and the raid is quick and decisive, but Al-Asad's body is not amongst the dead bodies.

Receiving a report that Al-Asad has instead taken over a local television station half a kilometer east and is broadcasting from there, the Marines move to secure the new objective. Under the chaos of low-flying fighter jets and patrolling Blackhawks, the Marines prowl their way through the town, strategically defending themselves from enemy troops. After securing a bombed-out building and parking lot, they proceed towards the side entrance of the TV station. They breach and clear the first room and proceed to the main broadcasting studio, where they encounter heavy resistance. After the main studio is cleared, they proceed to a large open hall, where the Marines regroup with their other team. The unit proceeds upstairs to the studio and busts down the door; however Al-Asad is nowhere to be found again. In fact, the entire room is empty and the broadcast was simply on a loop. Despite the considerable losses inflicted upon Al-Asad's forces and the capture of the town itself as a front line for the main invasion, the battle remains a strategic loss for the Americans, as their primary target has slipped away, presumably to the Presidential Palace.

On the shores of Kuwait (Modern Warfare Remastered)

Backdoor of the hideout Al-Asad is suspected to be in

Returning to the area the player rappelled down to

Crossing the street to advance to the TV station 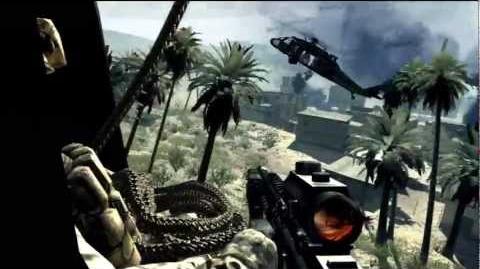 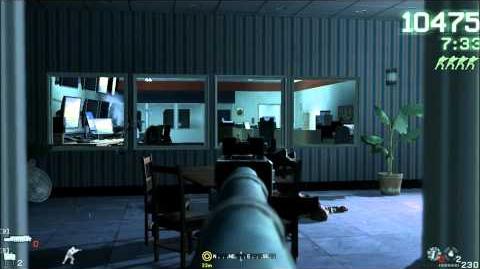 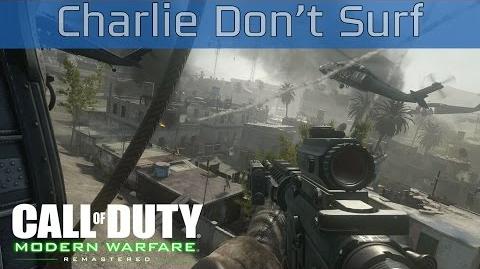 The building where Laptop 6 is found.