Any weapon obtained by the player
ASM10, .50 GS (Call of Duty: Mobile)

Charlotte Johnstone was born on February 20th, 1987. Between the age of 8 and 18, she was trained by her father, Captain Craig Johnstone, by hunting poachers during trips in Kenya and Tanzania.

In 2005, Charly joined the British Army, following a family tradition. She applied for and then passed selection for the Special Reconnaissance Regiment. She served multiple tours in Iraq, Afghanistan and Libya. From 2011 to present, she was paired with Lieutenant Jacob Thorne, and they quickly became friends, and together, maintained a 84.4% overall success rate in their missions according to Coalition figures.

At some point in Urzikstan, Charly successfully orchestrated the defense and liberation of a CIA safehouse in the southern part of the country. She became friends with Case Officer Kate Laswell.

The Al-Qatala attack on Piccadilly Circus on October 25th, 2019, solidified the commitment of the SAS to the Coalition. Charly's history with Laswell ensured the assignment of both Charly and Thorne.

Charly appears in Call of Duty: Mobile and was first added with her Sinister uniform during Season 12 Going Dark in a crate. With the Season 2: Day of Reckoning update, Charly was added as a default character for everyone. [1]

Charly also appears in the Comics, as part of the Season 2: Day of Reckoning update. Shown to be wearing her Angel of Death outfit, she appeared to have located Raul Menendez as part of the United Anti-Terrorism Coalition's efforts to stop Cordis Die. Her squad managed to have him apprehended in a building, only for the mission to go sideways, when the Templar showed up and killed every one of Charly's squad members. She was merely wounded by Templar's throwing knife, and was then forced to take cover behind a cubicle.

Shortly afterwards, Alex and Mara show up to assist her. They are shocked to find the bodies of her squad members before finding her in the cubicle she was hiding in. The pair inspect her wounds while she catches them up to speed. As she is helped away, she laments that she had blown their chance at stopping Cordis Die, but Alex says that they still have "one last shot", revealed to be a captive Mace.

Charly later appears during the briefing on recent developments, together with Alex, Soap and Rosa. Charly is assigned to accompany Price's team to Texas to locate Templar, along with Rosa and Mace. During this time, she also notes that Mara had went rogue to uncover what might've happened to Ghost.

Later on, she follows the UAC operators into the facility that Ghost apparently cleared out. Before long, they come under attack by both Templar and his consort Dame. She, along with Rosa, is disarmed of her weapons when Dame engages them, and is ultimately defeated with the rest of the group. She is then chained to pipes together with her colleagues to be prevented from escaping. Just then, Gabriel Rorke appears, greeting both Price and Mace. She asks if Price knows him, and Price introduces her to the Knight.

After a while of talking, Mace manages to break the pipe that he's chained to, tackling Rorke. Charly and Price find difficulty getting free of their chains, but Rosa reassures them that she has it under control. But then, Rorke manages to use the same pipe to knock both of them down when Rosa attempts to reach for the discarded gun.

Having had enough of toying with them, Rorke draws his gun to Price's head and demands to know Adler's location, only for the latter to reveal himself. Rorke mocks him for having come to him so soon, but Adler says that he's brought backup, along with an "old friend". The old friend is revealed to be Ghost, apparently still alive and accompanied by the Ghosts' German Shepherd Riley, which leaves everyone, including Templar, in shock and denial. Ghost then says his famous line, "You can't kill a Ghost".

Ghost then engages in a duel with Templar, while his fellow Ghosts deal with Rorke and Dame. The ensuing battle provides Rosa with the opportunity to release Price and Charly from their binds. She then later comments about wanting to have a piece of the Templar herself, but ultimately decides to let Mace and Ghost have at it.

Later on, she accompanies Rosa, Price and Ghost outside. While on the way there, they all stumble upon the dead body of Mara, which leaves everyone, especially Ghost, devastated.

Charly is later seen to be accompanying Price to another location, where he meets up with Hakan "Demir" Pala where he resolves a hostage situation. She questions Price on how he seems to know everyone—enemy or ally. Price tells her that by living as long as he has, she will get to know people.

Charly reappears later during the briefing by Shepherd regarding the Five Knights. Afterwards, she is shown to accompany Price and his team to Blackout (Mobile) to hunt down the remnants of the Five Knights. 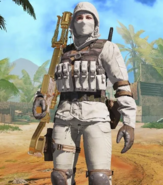 Charly in the comics, wounded

Charly explains what happened before the duo arrived.