The Chicom CQB (referred to as QCW-05 in the game files) is a bullpup submachine gun that appears in Call of Duty: Black Ops II and Call of Duty: Mobile. It was first seen in the Los Angeles Gameplay Trailer. In-game, it delivers high cyclic fire rate and is a three-round burst weapon.

The Chicom CQB is available at the start of the future missions. It is fully-automatic by default, unlike its multiplayer and Zombies counterparts.

The Chicom CQB is unlocked at level 37, alongside the HAMR.

The Chicom CQB's rate of fire is the weapon's main selling point, and point of contention. The Chicom CQB fires in three round bursts by default, unlike all other SMGs in Black Ops 2 multiplayer. The Chicom CQB fires at 1250 RPM within the burst. The main selling point to the Chicom CQB is that it has no burst delay, meaning that it is possible to maintain a fire rate of 1250 RPM with an active enough trigger finger, as the gun will be ready to fire again as soon as the third bullet is fired. With practice, the Chicom CQB can be fired much faster than most other SMGs, and even keep pace with the Skorpion EVO. It is worth noting that, unless the user hits all three shots in a burst at close range with at least one of those shots hitting the head, it is not possible for the Chicom CQB to get a one burst kill in Core game types. Users should use the Chicom CQB expecting to need multiple bursts to kill.

The Chicom CQB has an average magazine capacity for its class, holding 36 rounds per magazine, equating to twelve bursts before needing to reload. The Chicom CQB has a starting ammo loadout of 144 rounds. Both of these values are good overall, and average among SMGs, although the Chicom CQB's very fast fire rate and low damage profile means that ammo will be expended quickly.

The Laser Sight will improve the Chicom CQB's hip-fire accuracy. Although the gain is numerically slight, the hip-fire spread with the Laser Sight is tight enough for hip-fire to be reliable out to quite some distance.

The Foregrip increases the Chicom CQB's centerspeed from 1625 to 1649. The attachment's benefit is small enough that the effect borders on useless. The Foregrip is a waste of space.

The Quickdraw Handle will allow the Chicom CQB to aim down the sight in 100 milliseconds. This will allow users to snap onto target incredibly fast to dole out accurate fire.

FMJ will improve the Chicom CQB's penetration power, allowing it to better retain damage when shooting through objects, as well as deal more damage to scorestreaks, allowing it to destroy the likes of Sentry Guns, Guardians, and A.G.R.s much more quickly.

Overall, the Chicom CQB is an unusual SMG that requires the user to learn how to maintain its rate of fire. The Chicom CQB differs from the vast majority of burst fire weapons in that there's no burst delay at all, and as such, there will be a learning curve for those expecting the Chicom CQB to behave like other burst fire weapons, even faster firing ones like the M8A1 and B23R. For those who do get a hang of maintaining its fast rate of fire, the Chicom CQB provides longer range, superior accuracy, larger magazines, and more ammo than the Skorpion EVO, as well as a headshot multiplier allowing for rapid three shot kills in close ranges, even if the chance of such a thing occurring is rather low. The Chicom CQB's main challenge comes from maintaining its rate of fire, as those who can't come close to firing the Chicom CQB at its maximum fire rate will struggle to fare better than if they just used a Skorpion EVO, despite the Skorpion EVO's several statistical disadvantages compared to the Chicom CQB. Outside of the fire rate, the Chicom legitimately has poor damage metrics. The Chicom CQB will be terrible to use beyond medium range combat, and its low range can make medium range gunfights more difficult. With proper practice to ensure maximum fire rate with the Chicom CQB, the Chicom CQB will be a formidable weapon in closer ranges.

"With such a high capacity and rate of fire, I predict a high number of zombie fatalities."
— Marlton Johnson, when obtaining the Chicom CQB from the Mystery Box in Die Rise

The Chicom CQB is available in the Mystery Box for 950 points in TranZit, Nuketown Zombies, Die Rise, and Origins. It starts with a 40-round magazine and retains its burst-fire function from multiplayer. It has a fairly average damage output, not being very effective on high rounds, but good for accumulating points and headshots. However, the weapon has quite low ammo reserve, and coupled with the high rate of fire, the player is likely to run through all ammo rather fast.

When Pack-a-Punched, it becomes the Chicom Cataclysmic Quadruple Burst. It is more powerful, has a 40-round magazine with 200 reserve rounds, and shoots four-round bursts. Its style of shooting does not change, though it becomes more useful with the added damage. It can be Pack-a-Punched multiple times cycling new attachments. These attachments include a Reflex Sight, Select Fire, Fore Grip and Fast Mag.

In the game mode Turned, it is the fourth weapon to be obtained if the player is a human.

The Chicom CQB in first person 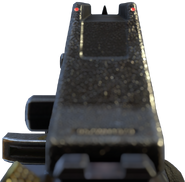 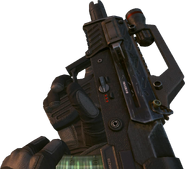 The Chicom CQB in third person

The Chicom CQB returns in Call of Duty: Mobile as the Chicom.

After the gun's rebalance, the Chicom can deal fatal damage at close range with very high rate of fire for a burst firing weapon, turning it into a fast killing submachine gun at close range. It also sports mediocre recoil, making it easier to fight close range, but might cause players trouble when engaging at mid to long range. The gun is also very mobile.

The Chicom can deal high damage to well-armored enemies, however it faces several troubles when fighting at long ranges. The gun was removed from Battle Royale in Season 9, and is only available as customized blueprints.

The Chicom in first person 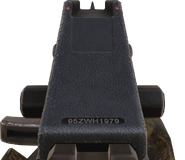