The China Lake is first used in "S.O.G." in a tunnel area near the part with the mortared out forest and is later used on a jeep while destroying tanks. It can be found in all three weapon caches in "Numbers". It is also seen in the mission "Crash Site" when in the crashed plane fuselage, with Woods questioning why the Russians would be using American weapons. The China Lake in singleplayer has a four round capacity, unlike in multiplayer and zombies where it only has two rounds.

The China Lake is a secondary weapon, and the last weapon unlocked for Create-a-Class, unlocked at Level 48.

The China Lake fires at a very slow rate of 16 RPM; it must be pumped after the first grenade is fired. When the second grenade in the tube is fired, the China Lake will either initiate its reload or be completely out of ammo. If Scavenger Pro and Sleight of Hand are in use by the player, the China Lake's pump action can be mitigated almost entirely. After a grenade is fired, it is quicker to instantly initiate a reload to reload 1 grenade and Reload Cancel than it is to wait for the pump action to complete. There is no potential to do this without Scavenger Pro, as the China Lake won't have reserve ammunition otherwise, and doing this trick without Sleight of Hand doesn't confer much of an advantage. With the two perks equipped, the China Lake can do this trick to mitigate the pump action on the first two grenades. This increases rate of fire and keeps the China Lake topped up. As such, players looking to make serious use of this weapon should try to make use of this trick whenever possible.

The China Lake has no hip-fire capability. Trying to hip-fire with the China Lake will automatically initiate the aim down sight sequence, and fire once the player is in the aiming state.

Handling, as to be expected, is terrible. The China Lake slows the player down to 80% of the base speed when it is being used, players can only strafe at 40% of the base speed, and the China Lake's switch speeds are lethargic. It takes 500 milliseconds to aim down the sight, the longest such time in the game. Also concerning for the China Lake is a very long sprint-out time, of 600 milliseconds. This is the longest sprint-out time of any weapon in the game. If caught off guard while sprinting, the China Lake is extremely slow to react. The China Lake's reloads aren't fast. It takes 1.3 seconds to reload 1 grenade, or 1.75 seconds to reload two grenades.

By far the China Lake's best asset as a launcher is its capacity, as it is the only launcher with a two shot capacity, instead of one. However, this doesn't improve the starting ammo loadout, as the China Lake has no ammo in reserve, just two grenades loaded into the China Lake.

As previously mentioned, Scavenger Pro and Sleight of Hand Pro significantly improve the China Lake overall. Scavenger Pro doubles the China Lake's starting ammo loadout to four grenades, and allows for reloads to be performed. Sleight of Hand Pro not only speeds up the reloads to the point where reloading one grenade is faster than the pump action, but it also speeds up the aim down sight time to 250 milliseconds. Both of these perks should be in use with their pro versions if one wants to maximize the weapon's potential.

A statistical anomaly with the China Lake exists in the form of its zoom level when aiming down the sight. Its innate zoom level is extremely low, lower than any other weapon in the game when aimed down the sight. This allows the user to maintain maximum peripheral vision when aiming, but this can prove troublesome if wanting to look down longer sightlines, as the low zoom level will make it harder to spot targets.

The China Lake is available in all Call of Duty: Black Ops Zombies maps, through the Mystery Box for 950 points. It is very effective for clearing out large waves but disorients the user after firing too close, due to shellshock. This drawback can be mitigated by using PhD Flopper.

When Pack-a-Punched, the China Lake becomes the China Beach. The China Beach holds five grenades and cycles faster, does not need to aim down sights to fire a shot, and reduces explosive shellshock to the player. While it is still an effective weapon, it is still considered inferior compared to the M72 Anarchy in terms of ammo, utility and damage. Overall, it is a poor choice for close quarters engagements.

The China Lake is also available as a power-up in Dead Ops Arcade. Here it seems to be automatic, but it is still pump action as the player can see the character model pumping the weapon before firing, but much faster. The China Lake only goes a small distance before exploding, which allows zombies to get close if the player is not aiming in the right direction. The China Lake is effective when firing into large masses of zombies on lower waves. According to the opening cutscene of "Five" it is John F. Kennedy's weapon of choice. 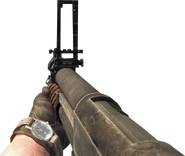 Pumping and ejecting the shell

Diving with the China Lake

A fired China Lake round 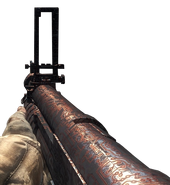 Render of the China Lake

China Lake in the Customization trailer

The China Lake was added to Call of Duty: Black Ops III on July 11, 2017 under the name MAX-GL (referred to as EX-41 in the game files), only available through the Black Market. Compared to its Black Ops iteration, it has faster handling noticeable in its fire rate, reload speed, weapon switch speed and ADS time, as well as increased impact and minimum splash damage, although its splash radius is smaller. The MAX-GL has a safety distance of 10 meters, and grenades that hit a surface within this distance do not explode, although a direct impact of this type is still lethal.

Unlike other launchers, the MAX-GL is not effective against aerial scorestreaks, as they can be hard to hit due to the arcing projectile and lack of lock-on. However, ground-based scorestreaks can be effectively destroyed by the launcher, and it fares well against enemy infantry. Although the fatal blast radius is rather small, a well placed shot can kill in one unless the enemy is using Flak Jacket. Due to the small ammo pool, Scavenger is recommended along with a primary weapon to replenish them as enemies killed by MAX-GL do not drop ammo packs unless killed with a direct impact within the safety distance.

The MAX-GL in Black Ops III

Aiming down the MAX-GL's sights 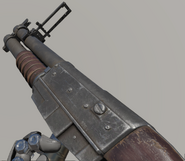 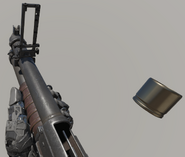 Pumping and ejecting a shell