Javier Salazar with a Five-Seven, DeFalco by slitting her throat with a knife, U.S. Drone Fleet, or any militiaman in "Second Chance" (player-determined)

A tattoo on her neck, resembling 'karma' in Chinese
Black eye from Salazar or DeFalco (player-determined)

M1911, any weapon at her disposal in Second Chance.

"So I guess you're famous now for... saving the world. It's very rare that we actually have a celebrity that's done something."
— Jimmy Kimmel interviewing Chloe

Chloe Lynch, also known as Karma, is a secondary character who appears in the campaign of Call of Duty: Black Ops II.

Chloe was born in Chicago, Illinois on June 6th, 1994. She went to college at MIT and earned a degree in robotics. At some point she won the TED Prize, "One Wish To Change The World", and was a guest speaker at a TED conference.

At some point, Chloe joined the Tacitus Corporation. During her time there she created a Celerium worm, capable of decrypting quantam entanglement computing. Sometime shortly before the main story began, she resigned from Tacitus

Although she doesn't appear, she is mentioned in "Fallen Angel". Section and his team are sent to Pakistan to investigate Raul Menendez. As they are tailing Menendez, Menendez will stop and converse with his second in command, DeFalco. One of the things they talk about is her capture, which DeFalco states he will handle personally.

Karma's first appearance is in the mission "Karma". After David's team reviews the footage they recorded in Pakistan, they are given a location to "Karma", at a resort called Colossus. They believe that Karma is a cyber-weapon which has been destroying their drones. Harper bumps into her on his way out of an elevator. He hits on her (not yet knowing who she is), only to be rejected.

After Salazar and David breach the CRC room, they gather information on "Karma" with the help of Farid. Upon searching supply manifests, security systems, and finally, security camera databases, they come across a picture a woman with a tattoo which is the same girl that Harper bumped into as he walked out of the elevator. They then realize that Karma is not a weapon but a woman. They also discover her name, Chloe Lynch, who is a recently resigned member of the Tacitus Corporation. She is then tracked to Club Solar. Mason notifies Harper and he tries to convince her she is in danger. Section soon joins Harper at the club, which is when DeFalco along with Mercs come in to search for her. DeFalco fires warning shots and demands that Chloe give herself up. DeFalco kills one hostage and just as he is about to shoot another, Chloe breaks free from Harper and surrenders herself. DeFalco captures her and orders the others to open fire on the club. Section and Harper run behind a bar and kill any hostiles in the club. Chloe is then taken away by DeFalco (who detonates previously planted explosives over the hotel), and Section and Harper go after them.

If the player catches up to DeFalco and kills him, Chloe is secured and taken to U.S.S. Barack Obama.

If the player does not make it to DeFalco in time, she is taken captive in Yemen, where she can optionally be rescued by completing Second Chance.

If she is rescued she will be taken to the U.S.S. Obama. where she tells the team that she created a worm which could decrypt anything. After she decodes it, the team learns of Menendez' attacks that will take place on June 19. If she is not rescued, then the CIA Nerd will take her place.

She is then seen at the end of "Odysseus". After Menendez subdues Briggs, it is revealed that Salazar was working with Menendez. After Salazar kills the sailors, he or DeFalco (if alive) will attempt to kill her. There are different options as to what will take place during this:

If Farid survived Achilles' Veil and DeFalco survived Karma, DeFalco will knock Karma out, before Farid kills him, which leaves Karma alive. However, the Strike Force missions need to be completed for her to survive the attack on the ship altogether.

If Farid survived Achilles' Veil and DeFalco did not survive Karma, Salazar attempts to shoot Chloe, but Farid jumps in front of the bullet and dies. Karma tries to confront Salazar, but she is knocked out, although she survives the situation. Like with Option 1, Strike Force needs to be completed for her to survive further.

If Farid did not survive Achilles' Veil and DeFalco survived the mission Karma, he will slit her throat with a knife, ultimately killing her.

If Karma survives the Server Room confrontation (like with Options 1 and 2), but the Strike force missions are incomplete, or if Briggs is killed, then she will die as the SDC fighters bomb the ship.

After her death/survival, Menendez uses a Celerium chip to hack the U.S. satellite network that controls the U.S. military drone fleet. If she survived she will trace the source of the transmission controlling the drone fleet. Her survival or death will also affect the story's ending cutscenes.

She manages to find a Celerium worm attacking power grids all over the world. She successfully disables it, which stops the attacks on the Earth and (determinately) prevents Menendez from being able to escape prison. She will then be interviewed by Jimmy Kimmel, and if the player capture Menendez and Chloe is alive, as she knows Menendez is watching, she taunts him, leaving Menendez enraged (leading to him bashing his head on the TV multiple times) Also, even though it was off-screen, if Chloe is alive and Menendez is dead, she will still defeat the celerium worm and still be on the show.

The CIA Nerd will also find the Celerium worm but is unsuccessful in cracking it. This allows Menendez to escape.

Harper bumping into Chloe at the beginning of "Karma".

Chloe being secured at the end of "Karma". 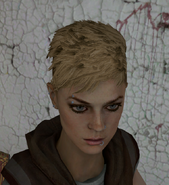 Chloe jumping on board.

Chloe being killed by Salazar (player-determined).

Chloe in the background.

Karma being interviewed by Jimmy Kimmel.