The Chopper Gunner is a ground-controlled Killstreak reward which gives the player the ability to control an armed Helicopter. While the Rangers, SEALs and Task Force use the AH-64 Apache, the Spetsnaz, OpFor and Militia use the Mi-28 Havoc. It is the first iteration of the "chopper gunner" killstreak in the Call of Duty franchise. While its effectiveness rivals that of the AC-130, it has been hailed by many as the most powerful killstreak of all time.

Contrary to popular belief that the Chopper Gunner lasts for 40 seconds, it lasts for approximately 58 seconds (including the time flying to the battlefield). Shots from the Apache's/Havoc's cannon are explosive and can penetrate light cover. It does have aim assist features, floating crosshair and a target marker. The steady stream of shots allows the user to easily kill many enemy targets, especially in outdoor levels. The pilot will occasionally call out targets, and will either orbit the map as an attack helicopter would or stop at points where enemies often spawn. The latter of these flight paths is noticeably more effective, and occurs at Afghan, Invasion, Skidrow, Favela, Scrapyard, Highrise, Terminal, and Trailer Park.

The chopper has one flare that is automatically deployed to divert guided enemy missiles. After this flare is spent, it can be hit with any missile. It is possible to shoot down a Mi-28/Apache with an unguided missile, since they are not affected by flares. It is also possible, although difficult, to shoot a guided missile from right below the chopper and if the distance is short, the flare will not have time to divert the missile. This is easier with Pave Lows, but is also possible with Chopper Gunners.

When first activated, the user sees, from the gunner's point of view, the helicopter taking off some distance from the battlefield and flying towards it. The user can begin firing almost immediately, but hitting targets at this distance is usually impossible because the gunner cannot shoot anything at such an angle.

If the user is killed while using the Chopper Gunner, they may finish using it before respawning. One exception is in Search and Destroy where it stops after the player dies, which applies to other user controlled killstreaks such as AC-130 and Predator Missile. Another exception to this rule is if the player reaches the team killing threshold in Hardcore Team Deathmatch, which causes them to suicide and sit out per the friendly fire penalty. Using a Flashbang on users of the Chopper Gunner is more useful than killing them in respawn gamemodes as it impairs their Gunner vision, while killing them makes it impossible to do so until the Chopper Gunner runs out.

The Chopper Gunner is easily destroyed by Stinger missiles, as only two are needed, and the maximum amount of missiles a Stinger can have is 2, which is no problem for Scavenger users. The helicopter has one flare. If an enemy player has a Harrier Jet in the air, the Harrier Jet can be used to kill the Chopper Gunner, as it is placed below the Harrier Strike.

With the KillCam, pausing the game while watching a Chopper Gunner's cam shows their position among the enemy team. This allows them to easily be killed by flanking maneuvers. Also, the users' position without pausing is seen by the green "+" symbol on the regular vision. 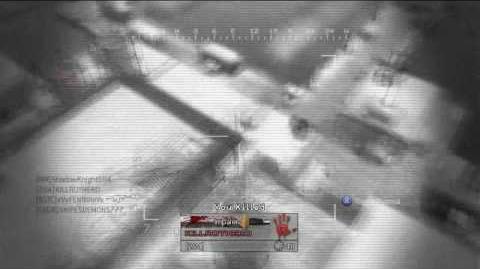 "Be the gunner of an attack helicopter."
— In-game description

The Chopper Gunner makes a return in Call of Duty: Black Ops. However, it only requires a killstreak of 9 (8 with the Hardline perk).

After attaining the killstreak, the user takes control of a machine gun emplacement on a UH-1 Huey helicopter. It takes a short amount of time for the helicopter to reach the boundaries of the map. While this occurs, the player's character opens the side door of the chopper and takes the controls of the Minigun. Unlike the Modern Warfare 2 version, the Chopper Gunner in Black Ops flies around the edges the map instead of hovering over a particular zone for a few seconds and then moving to another. This Chopper Gunner also uses real first person imaging, unlike Modern Warfare 2's thermal imaging.

When the helicopter is above the map, the user is able to fire the minigun constantly for as long as the helicopter is being controlled. If shot down, the user can still fire the minigun, but much less accurately, as the chopper spins out of control towards the ground. There are no ammo limits or overheating to worry about; therefore most players simply hold the fire button down for the chopper's entire duration. Unlike the Modern Warfare 2 variant, the Minigun causes people it fires at to be stunned and move more slowly, virtually ensuring the kill by making it almost impossible to escape.

The Chopper Gunner lasts for 60 seconds unless shot down. It has one set of flares which deter enemy missiles attempting to bring down the vehicle. The player controlling the gun can be killed but can continue using the killstreak reward. Like all other helicopter-based killstreaks in Black Ops, the UH-1 will appear differently based on whether it is controlled by friendly or hostile forces. "Friendly" Hueys will be painted in a tan camouflage with green markings, while "Enemy" Hueys will be painted in gray camouflage and have red markings.

The Chopper Gunner in the killstreaks menu.

Looking down the minigun.

A Third person view from the gunner.

The Chopper Gunner seen from Call of Duty ELITE.

Firing the Chopper Gunner on Nuketown. 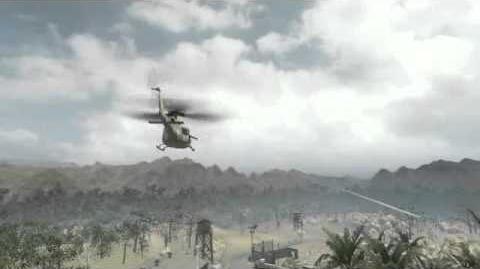 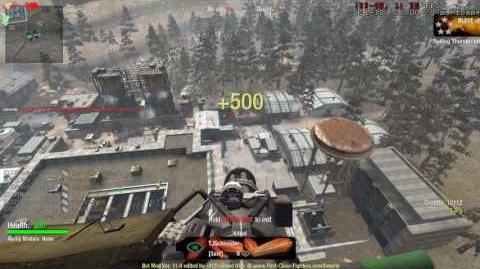 Chopper Gunner was featured in the 2013 Beta of Call of Duty: Online. It was cut from the game.

It also appears in Call of Duty: Heroes, acting like it does in Black Ops. It is a Hero Skill exclusive to Price, and deals 8 damage initially.

"Control an assault chopper armed with a turret and air-to-land missiles."
— In-game description

The Chopper Gunner returns in Call of Duty: Modern Warfare as a Killstreak. The AH-64 Apache is used as the base vehicle for the Chopper Gunner and it is similar to the Modern Warfare 2 version. It is different, with a higher rate of fire, the ability to control its movement, toggle between normal and thermal imaging, and fire 8 Hydra rockets, akin to the VTOL Warship in Black Ops II.

"Be the gunner in a close air support helicopter."
— In-game description

The Chopper Gunner returns in Call of Duty: Black Ops Cold War multiplayer and one of the few scorestreaks available within Zombies where it is craftable for 250 High-End Salvage or from the Mystery Box where it's classed as a Legendary tier item.

"Fire from the skies in a chopper with a gun that has unlimited ammo. Careful not to overheat!"
— Description

The Chopper Gunner returns in Call of Duty: Mobile.