For other characters, see Walker.

"Everyday I fight to save my life and the lives of my men. I'm proud by the frontlines."
— Chuck Walker in his opening speech

Lieutenant Charles “Chuck” Walker was an American soldier who fought during World War II, he was assigned to Able Company. Lt. Walker is the playable character in the American campaign for Call of Duty: Finest Hour. He was good friends with Benny Church.

Walker fought in North Africa, Sicily, and landed at Normandy on D-Day.[1] Afterwards, he was assigned to help capture Aachen, which became the first major German city to fall. After that, he fought at Stavelo in the Battle of the Bulge, later remarking that it was the first time in the war that he thought he just might not make it back home. He was then given a battlefield officer's commission (promotion) from Sergeant to Lieutenant. Later on, he took Remagen, securing one of the last bridges over the Rhine.

"There have been times in this war where I thought that I actually might not make it back home, but the Germans can only stay home, and that's no longer a safe place to stay."
— said during a narration.

"That bar means Lieutenant, Sergeant Church, or did you forget about those battlefield promotions after our last mission? I oughta' bust you right back down to Buck Private."
— said to Sergeant Church after he mistakes Lieutenant Walker for a Sergeant. 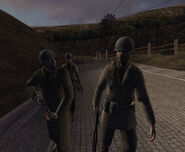 In Road to Remagen (right)
Add a photo to this gallery

Retrieved from "https://callofduty.fandom.com/wiki/Chuck_Walker?oldid=2530929"
Community content is available under CC-BY-SA unless otherwise noted.