The Cigma 2 is a launcher featured in Call of Duty: Black Ops Cold War. The Cigma 2 is able to both lock-on to scorestreaks and vehicles, and able to be free-fired against enemies.

The Cimga 2 can be brought into any map via Create-A-Class, at Loadout rarity and can be found at any rarity via the Mystery Box for 950 Essence. When upgraded via Pack-a-Punch Machine it becomes the Omega 3FA, gaining an increased ammo capacity of 3 and increased reserve ammo.

The Cigma 2 also appears in Dead Ops Arcade 3: Rise of the Mamaback, where it takes up the automatic rocket launcher role previously occupied by the RPG-7 and Blackcell from previous DOA installments. The Cigma 2 in Dead Ops lacks the scope it has in all other modes. 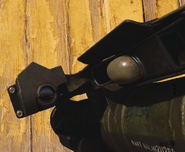