Civilians are non-combatants who fall under the laws of their own country and do not take part in any hostilities.

In Call of Duty: Finest Hour, Yusef is a civilian man who helps out Popski's Private Army during the British Campaign levels Mission: Matmata and Depot Saboteurs. He wears clothing common to Arabic civilians in the area and it is possible for him to die in battle.

Firstly, in Call of Duty 4: Modern Warfare, many civilians can be seen being executed by the OpFor in "The Coup", in which the playable character is the President of the unnamed nation in which the events take place. Several other non-combatants are seen hiding and fleeing from the violence. A rural farmer appears in the level, "Hunted", who is questioned and is about to be executed by Ultranationalists (the player can choose to save his life, which earns an achievement, "Man of the People"). Two civilians appear in the following level, "Death From Above", when several S.A.S. commandeer two civilian jeeps (the mission is failed if they are attacked). Many civilian drivers can be seen in "Game Over", particularly the first portion of the level in which the player's jeep enters a highway. Shooting them through their windshields has no effect, likely due to the confusion which would arise from a variable such as randomly crashing vehicle in the midst of a scripted chase. Many dead civilians can be seen in "Mile High Club". One last civilian, originally named Kriegler, is held hostage at the end of the mission and must be rescued.

Civilians appear more frequently and in far greater numbers in Call of Duty: Modern Warfare 2. Easily, their most prominent appearance is during the mission "No Russian". As an undercover CIA agent, players (in the role of Joseph Allen) join a group of Russian Ultranationalists in an outright massacre in a Moscow airport (Zakhaev International Airport). Scores of civilians are murdered in cold blood by the player's allies. The player can choose to kill the civilians, however it should be noted that prior to the mission's start, players of the game are given several warnings as to the graphic nature of the following scenes, and may choose to skip the mission entirely.

"No Russian" sparked a wave of controversy regarding Call of Duty: Modern Warfare 2, with many in the media displaying outrage at the notion of players being instructed to kill unarmed civilians in cold blood. The game, however, gives no such prompt; it is possible to complete the level without killing a single civilian or an airport security officer. In Russia, copies of the game had the mission removed entirely. Some gaming outlets also criticized the level, with IGN likening it to a publicity stunt by Infinity Ward. Also, contrary to initial popular belief, there are no children in the airport.

A large group of civilians is seen in a favela in Rio de Janeiro, Brazil in the mission, "Takedown". A member of Task Force 141 (Meat) evacuates them from the area with a warning in Portuguese and a burst of gunfire aimed at the sky. Further non-combatants are seen in "Bomb Squad" and "O Cristo Redentor".

A single civilian is present in the mission "Exodus". As the player advances down the street at the beginning of the level, a car driving towards the starting point will speed by on the street. The civilian driving said car will crash it and then explode; there is no way to save them.

In "The Pit" for the mission "S.S.D.D." and the Special Ops mission The Pit, there are several civilian targets as well as hostile targets. If the civilians are shot in "S.S.D.D.", the player will receive a time deduction after completing the course. If the civilian targets are shot in "The Pit", the player will be unable to achieve a 3-star rating when they complete the course.

Civilians are held hostage in "The Only Easy Day... Was Yesterday" and the Special Ops mission Wetwork in the oil rig.

In "Operation 40", a woman dancing and a man leaning against a wall smoking appear in the initial cutscene. Later, groups of civilians appear during the fight with police and the escape from Havana.

In "U.S.D.D.", there are people in waiting lines and people working in the Pentagon.

In "The Defector", NVA are seen executing many Vietnamese civilians near the beginning. Many dead and living civilians are seen in this level. Of interest is one civilian kneeling and crying over a deceased one, who cannot be killed without penalty, seen shortly after meeting with Viktor Reznov. At one point, the player can also see the NVA executing Vietnamese civilians at a wall.

On the streets in "Numbers", many Hong Kong civilians are seen fleeing once the fighting spreads in Kowloon, they can be killed without penalty.

After the rocket is destroyed in Executive Order, a group of German scientists, as Frank Woods tells the player, is seen on fire, running from their building. After some seconds they will drop to the ground, dead.

In "Victor Charlie", during the village raid, Vietnamese villagers can be seen fleeing from the fighting.

Russian workers, along with Russian and German scientists, are seen fleeing and being killed by Nova 6 in "Rebirth". More scientists are found and can be killed in various missions involving the investigation of Nova 6.

Civilians return in Call of Duty: Modern Warfare 3 in several missions, one of which being "Persona Non Grata", where multiple civilians are shot down in the streets by Ultranationalist forces. They are then seen in Africa in "Back on the Grid", where they are being executed by the militia. Civilians also appear in London in the level "Mind the Gap" three times: once when the SAS are pursuing the Inner Circle train on a platform. Several are caught in the crossfire and killed. Civilians both living and dead appear in the ruins of Westminster Station and large crowds of them appear outside Parliament being held back by police. The player can only kill one civilian free of charge in this level.

Many civilians are seen in Prague in the level "Eye of the Storm". Most but not all are part of the Czech Resistance. In the beginning of the level, Russian soldiers are seen taking civilians as POW's, ready to execute them. They can also be seen throwing dead civilians into the water. They are massacred when the Russian BTRs open fire. Many of the civilians are seen bleeding on the ground in houses. In the safehouse, a woman will open her apartment door, apparently oblivious to the full-scale battle raging outside, quickly take stock of the situation and slam the door shut. This is one of bloodiest levels in this game.

In "Davis Family Vacation", the playable character, Mr. Davis, is a civilian vacationing with his family in London. He and his family are killed in an explosion of a truck in Westminster as a part of terrorist attacks.

During the flashbacks in "Blood Brothers", the events of the beginning of "No Russian" from the previous game can be seen.

Many civilians also appear in "Dust to Dust" in the Hotel Oasis, running out of the lobby and elevators as Yuri and Price battle Hotel Security and Inner Circle. The Hotel Security Guards will try to kill civilians fleeing from them, indicating that they support Makarov. Again, one can be killed without penalty.

Civilians are seen in several campaign missions in Call of Duty: Black Ops II. Wealthy civilians feature prominently in "Karma" along with Colossus resort employees such as construction workers and receptionists. DeFalco and his team of Mercs kill civilians in the Solar nightclub.

In "Five" and Shangri-La, some of the zombies featured were formerly civilians.

Civilians appear in Call of Duty: Ghosts in the levels "Ghost Stories" and "Brave New World". In Ghost Stories, they watch as ODIN starts to destroy San Diego as Logan, Hesh and Elias run by them. Their final appearance in the game is Brave New World when some are taken hostage by the Federation by a gas station and murdered when Hesh and Logan's recon team find them and attack them. They appear near the end at Fort Santa Monica as Hesh, Riley and Logan drive by their camps located in the city.

Civilians appear in several missions of the campaign such as Atlas, Traffic, Aftermath, Manhunt, Utopia, Sentinel and Collapse.

Civilians also appear in the Exo Zombies map Infection, where they must be rescued by bringing them to a Warbird.

Civilians appear in Operation Cobra, Liberation, and Collateral Damage. In "Operation Cobra", civilians are seen hanged on a tree. In Liberation, an elderly couple are seen being asked to leave a security checkpoint near the German HQ in Paris France and inside the German HQ there are German Soldiers dressed in civilian clothes, including some German Female Secretaries. In "Collateral Damage", Joseph Turner orders the 1st Platoon to evacuate the German civilians, including Anna and Erica.

Two men being hanged on a tree.

German Civilians on a truck. 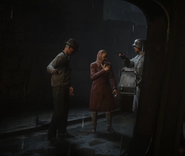 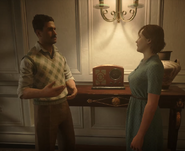 In Piccadilly, there are many civilians present during the terrorist attack. In which, Al-Qatala mercilessly murder many of them with guns and bombs. Later on the level, Kyle Garrick and John Price are rescuing hostages - one of them with a bomb vest. Seeing that its impossible to defuse it or take it off in time, Price decide to throw him off the aisle as he explodes.

In Embedded, there are many Urzikstani civilians under Barkov's forces control, many of which doing force labor.

In Clean House, many of the house residents are unmarked civilians. However, some of them are affiliated with Al-Qatala, which they might pickup a gun in attempt to retaliate against the SAS team.

In Hunting Party, several hospital staffs are fleeing from the gunfight inside the hospital. Later on the level, there are some patients. While its mostly civilians, one of them is an Al-Qatala militia, ambushing the marines.

In The Embassy, there are many embassy staffs trapped in the embassy during the siege - many of them are ruthlessly murdered. At one point, player has to help Stacy Davidson, who retrieves the embassy keycard, to get her to safety while evading Al-Qatala militants.

In Hometown, Russian forces under Roman Barkov murders civilians with gas attack. Playing as Farah, she has to witness may of these cruelties as she and Hadir attempted to escape from the city.

Civilian appears again in The Wolf's Den. Like in Clean House, Al-Qatala affiliated civilians are hardly distinguished from normal civilian until they attempt to retaliate.

In Old Comrades, there are many civilians present during the chase. Many of which are gunned down by Al-Qatala.

In Going Dark, there are some hostages being held by Al-Qatala. Which are tortured in order to gain information regarding to Roman Barkov.

And in Into the Furnace, several workers of the chemical factory are seen fleeing from the gunfight inside the factory.

In Brick in the Wall, Edda Kraus and her son Wilhelm Kraus are featured in game when "Bell" infiltrates their apartment in look for Franz Kraus' briefcase.

In Operation Red Circus, there were 8 citizens who were claimed to be sleeper agents.

In Desperate Measures, Piotr Ivanov was a university professor and prisoner of the KGB who had a wife and daughter.

In End of the Line, several civilians were forced to reverse engineer detonations codes while under Nikita Dragovich's sleeper agent programming.

And Carver Butcher is seen in 1984 after meeting with Russell Adler, Alex Mason, Jason Hudson and Frank Woods.

In Stalingrad, Boris Petrov is the father of Polina Petrova and Misha Petrov. It is also mentioned that he had a wife.