There are five ciphers known and solved on the map Classified.

This cipher is Übchi cipher using "Classified" as a key.

1. The following is the transcription for record of Richtofen's Requests. For OPERATION STAPLER to go into effect, these stipulations had to be met.

2. This list specifically details Richtofen's personal demands - it does not specify scientists recommended for acquisition

One Portrait of Richtofen to be hung in the Pentagon
One American Baseball signed by your Babe Ruth
Twenty of Your American Dollars: Ten Pennies, Four Nickels, Two Dimes, Two Quarters, Four 1's, One 5, One 10
One of these "American Hot Dogs" I've been hearing so much about
One American Teddy Bear, speaking of...
Teddy Roosevelt's Moustache from Cold Storage (I know you have it)
One Polarization Device to be constructed [coordinates to be specified]
Titanium Cog of My Precise Specifications
J. Robert Oppenheimer's Chalkboard (not cleaned)
Build a nice flower garden outside your Pentagon Facility - it desperately needs the color
President Truman's Hat 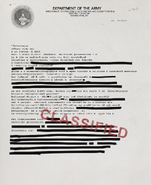 This cipher is a Columnar transposition cipher with Pentagon and Classified keys for duplicates numbered backwards.

I've been logging materials acquired from Group 935 for some days now (Major Sawyer has asked me to evaluate files pertaining to undead experimentation) and this afternoon I happened upon an old friend.

Hidden deep away in storage was Dr. Maxis' Original Matter Transference Prototype. Apparently, it was one of the items the Americans acquired when splitting Group 935's resources with the Russians. Unsurprisingly, it's in a terrible state of disrepair. Missing pieces, badly damaged, completely non-operational. To be fair, Maxis himself stopped using it after the failure of those initial tests in 1939.

While useless in its current state, it will provide great reference when we begin teleporter development at this facility. One thing I had never noticed before - scratched into the bottom of the machine was a message: "For M , who started me on this journey."

It struck me as odd… I can't recall anyone at Group 935 who went by that initial. I haven't the faintest idea who Maxis could have been referring to. 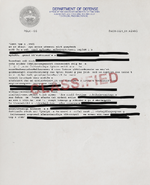 This cipher is a Playfair cipher using "CLASIFEDBGHJKNOPQRTUVWXYZ" as a key.

MEMORANDUM FOR SECRETARY OF DEFENSE

I've had my men examine all materials acquired from Division 9 in 1946 and have been unable to find the elemental shard. According to our records it was on the original manifest for the formal acquisition of materials and verified as delivered. So I'm more than a little perplexed as to where it's ended up. I see two possibilities:

2) It was intentionally taken by a specified individual and is being kept from us. As to who might have taken it, I have my suspicions. For several years Groom Lake was our primary storage for all Division 9 materials.

Perhaps Pernell may have answers as to the fate of the elemental shard. 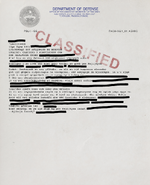 This cipher is a Affine cipher with A=5 and B=25 as keys.

We’ve requested they immediately begin investigating weaponized solutions to "combat" the Samantha threat. Groom Lake is delivering a shipment of element 115 to the site in Washington so they may begin testing.

The Hanford project has requested access to all research regarding the MPD reconstruction project, however I declined this request.

At this time this project should remain at Groom lake – in recent months they have proven more than capable. It may be our greatest asset in the fight against this threat. 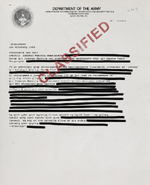 This cipher is a Vigenère cipher using "Classified" as a key.

I don't know why I'm doing this. Is anyone even receiving me?

I don't know if there are multiple outcomes, or if this has always been the only one. No matter what we do, what we fix, we still end up here... this time travel shit, multiverses, shit fries your brain.

I hope Richtofen established contact with the others. Woke them up. It's the only way now. It's up to them.

Not much time left now. 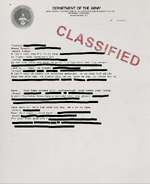