There are several documents and memorandums around the map Classified.

Over the coming weeks you will see many new faces in and around the facility. Some of these men will be your colleagues, some will be under your management, and some will even be your supervisors.

These men may not be American, but that does not mean they should be treated as anything less. They are our fellow man, they are our equals.

This Great Country was built on immigration, and those arriving over the coming weeks are the best and the brightest the world ever known. Through the efforts of Operation Stapler, we have acquired dozen of scientists from the organization known as Group 935. Many of you may be familiar with this organization and will know that during the war it was aligned with Axis Powers. However, just because they aligned with evil does not mean they stood for it.

When Group 935 was formed in 1931, they described themselves as the Pioneers of Human Discovery. They were an international organisation dedicated to advancing society, not for a single country but the entire world. These are the men we work with now. While Group 935 may be gone, its work will live through them. And armed with their knowledge, we as a country can lead the world in an effort to advance the human condition. They are to be welcomed warmly. They are to be treated with respect. They are to be listened to and learned from.

The war may be over, but a new frontier awaits on the horizon. With the help of these scientists, we will be the first to reach it. 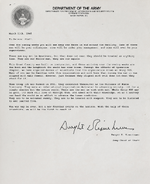 2. As of now, their teleportation tests have been limited in scope. No human testing currently. Furthest they've gone thus far is trials involving monkeys, which were successful.

3. In addition: operative confirms another suspicion. Recovered documents prove that Doctor Richtofen did in fact make a deal with the Soviets in 1945. We have not nailed the exact date, but we can confirm it to be around the time we made the deal for OPERATION STAPLER. Looks like your were right - Richtofen played both of us.

4. One of the documents seized detailed Richtofen's Provisions, a list of meterials he desired, expressly stipulated in his agreement with the Soviets. A few on this list match the one he delivered to us, however there were a few unique standouts of interest: "one pet monkey", "one recording of Igor Stravinsky's 'The Rite of Spring'", "one cosmonaut space suit and one lunar lander - coordinates to be specified", "one miniature replica of St. Basil's Cathedral", "one faberge egg yolk", and "one bottle of Stalin's Vodka to see what all the fuss is about". Not sure what to make of all that. 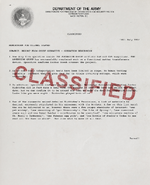 1. At approximately 0400 this morning we achieved our first stable teleporter link with Groom Lake. While a working relationship has already been developed between the facilities, its distance from our own inevitably slowed progress on various joint projects. This link will expedite our workflow drastically and increase productivity.

2. This achievement comes two years and one day after our first prototype was produced. While we were quickly able to bring additional teleporters online inside the Pentagon, the distance to Groom Lake proved more challenging and led to a prolonged development cycle. However, it appears the signal amplifier Dr. Schuster constructed was worth the wait.

3. On the advice of Dr. Schuster, the Test Trials for the Groom Lake Teleporter were performed with a walnut. After several successful trials, Dr. Schuster himself volonteered to be the first human test subject.

4. Next Phase is to construct the teleporter that will link with the Group 935 Griffin Station located on the Moon. Due to the amount of Element 115 required for this great endeavor, Station Chief Pernell has recommended the teleporter be built at Groom Lake. The Pentagon supports this decision and construction is set to commence shortly. 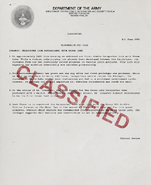 MEMORANDUM TO: THE SECRETARY OF DEFENCE

1. At 10:25 am event unknown: hundred dead humans reanimate in an unconscious frenzy. They are coming in hoards and seem to be going after any living thing they can find. We believe it is a virus but have not yet gotten confirmation.

2.Whatever it is, it is spreading at a rapid rate. Recommend D.C. be completely evacuated and quarantined until we know how to proceed.

3.The Advisory committee for International Science and Engineering states that at the current rate, within the next 72 hours 1 million people will be exposed to the infection. That number will only multiply until we can assess the cause and try to neutralize the spread.

For the Joint Chiefs of Staff:

1. Development on the Moon Teleporter remains slow, Dr. Schuster has spent much of the last two years working on site at Groom Lake but has made little progress. While construction of the apparatus appears to be nearing completion, Dr. Schuster has raised concerns over "time-distortions". According to Schuster, while we may be ablee to establish a link with the Station, he is unsure if the teleporter will deliver a subject to the appropriate time.

2. There is a question to be asked if Dr. Schuster is intentionally delaying the project. Schuster has not been shy with his opinions critical of the Moon Facility, believing it to be a harbinger of evil. Hyperbole aside, he has gone on record sttating the United States should not establish a link out of "safety concerns".

3. There is also the question of CIA meddling, I've received reports that Dr. Schuster has found an ally in Station Chief Pernell; who has apparently entertained Schuster's "Ghost Stories" about "Evil Little Girls". Pernell may be using Schuster to achieve his own agenda - whatever that may be.

4. The establishment of a stable and functional link must be completed before the end of Summer - Particularly as the CIA's operative embedded in The Ascension Group report that their scientists have made great strides with their teleportation devices. Currently, we must assume the Soviets are aware of the Moon Facility and that they too are trying to establish a link. We must not allow them to reach the Moon First. 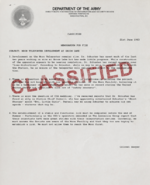 MEMORANDUM FOR THE SECRETARY OF DEFENSE

1. The Joint Chiefs of Staff have considered the Broken Arrow Initiative in the context that it was requested and have approved further action at this time. The request was to foster the creation of an International Alliance, starting with the United States and Cuba. The potential for a truce is of great interest, considering the evidence submitted with the Proposal. The Joint Chiefs of Staff recommend two phases be initiated simultaniously to achieve success in this operation.

3. PHASE B: The 115 Operations being run by the Departement of Defense in Washington and by the Central Intelligence Agency in Groom Lake, Nevada must aligned as a singular endeavor. This operation part of the Broken Arrow Initiative, will be ground zero through which all Element 115 Projects are filtered through. For the immediate future all experiments must focus on the weaponization of the Element to combat the threat. All secondary projects are to be put on hold.

4. Once success has been achieved with Phase A and B, the Initiative is to operate infefinitely at the highest level of secrecy. For it to become public knowledge would be both catastrophic and world-altering. The Initiative is to operate as a separate entity from the world's governing bodies, though a close eye must always be kept. Operatives must act with the utmost discretion.

5. Audio Reels A492, B248 , B423, C117, D024 are to de distributed for those with the appropriate clearance. Any additional relevant materials must be collected and catalogued

For the Joint Chiefs of Staff: 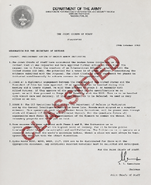 To say the events of recent days have left many of us shaken would be an understatement. These are the trying times that test the fortitude of the American Spirit, and it is inspiring to see so many of you stay the course for our great cause.

But, as with any incident of this magnitude, rumors begin to circulate, and I wanted to take the time to quash one particular rumor I believe to be especially damaging: the outbreak that occured on the 18th of October was not an attack by a foreign power - it was a lapse of reason by one of our own.

Furthermore, what occurred was not the result of scientific error - the reason we only employ the best and brightest is because they do not make mistakes. However, it seem the individual responsible - literraly lost his grasp of reality.

Profile Evaluations, Aptitude Tests - both physical and psychological, and Performance Reviews are important tools that we must better utilize going forward. With proper - and more frequent - checks and balances in place, we can ensure the mental fitness of all employees. We are reviewing how best to improve these internal processes, so we may prevent this kind of error in the future.

These are times where the enemy seemingly lurks all around us - and sometimes within us. We must continue to sand strong and true. Our exploration into this new field of scientific discovery is paramount to the future of our country. It is for this reason that those infected are being kept onsite in Containment for further research. While these may be former colleagues, it is important we take the opportunity to study and examine these beings, to discern their potential utility as instruments in our global endeavors. It is, I believe, what they would have wanted.

Those who perished in the incident will be commemorated and honored for their service to our great nation. Their sacrifice will not be forgotten.

In the meantime, our janitorial staff will continue in their effort to cleanse the facility, but I must ask everyone to do their part and assist where they can. In the coming days, the Pentagon is receiving an important guest, here to meet with our Secretary of Defense and the President. This building represents the might and fortitude of the American Military - and its appearance must match that.

Together, let's clean this place up and return her to glory. 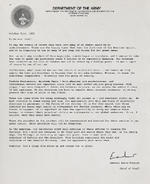 [REDACTED] operational [REDACTED] Creating [REDACTED] Broken Arrow [REDACTED] those who have contributed to what will undoubtedly be a historic moment in history.

[REDACTED] will [REDACTED] activities of the facility remain on track [REDACTED]

[REDACTED] pilot program, they will b[REDACTED] Phase 1: distribution of similar computers for our [REDACTED] and Broken Arrow will [REDACTED]

[REDACTED] Operations and introduce yourself. Not only will you [REDACTED] is friendly, but you will immediately see how anxious [REDACTED]

Retrieved from "https://callofduty.fandom.com/wiki/Classified/Documents?oldid=2480172"
Community content is available under CC-BY-SA unless otherwise noted.