For the sword, see Claymore (melee).
For similar pieces of equipment, see Spikemore and Shockwave Claymore.

In Call of Duty 4: Modern Warfare, the claymore is first seen in the level "Blackout" when Gaz orders Soap to place them in front of the guard house and draw the guards' attention.

Usually, the player starts out with Claymores in their inventory. Claymores are mainly used in "One Shot, One Kill" after the player shot Zakhaev when Captain MacMillan orders the player to plant Claymores around the perimeter in order to kill enemies before they get close enough to snipe them.

The Claymore is unlocked via the perk Claymore x2 at level 23 and can be used to defend a position from enemy assault. Claymores are mostly used when a player stays in one area and wants to protect themselves. Upon spawning, the player is stocked with two claymores. The amount of damage delivered by the claymore increases with the Sonic Boom perk, as it increases the damage of all explosive weapons damage.

A Claymore being held in Call of Duty 4: Modern Warfare

A deployed claymore in Call of Duty 4: Modern Warfare

"Use your claymores if you have 'em."
— Simon "Ghost" Riley

The Claymore makes a return in Call of Duty: Modern Warfare 2, however, it is available as an equipment instead of as a perk. Players only receive one in the beginning of a match, however, the player can resupply them with the Scavenger and One Man Army perks, although the player can only place two claymores at a time; if a third is placed, the first will explode. If two Claymores are placed so that the laser detectors cross, both will explode.

If a player plants a Claymore, stands in front of it and shoots, the Claymore will damage and kill the player. If an enemy shoots it, it will damage its owner and any of the owner's teammates, as well as the shooter, but not the shooter's allies. Also, a player can never trigger their own or allied Claymores, but if they are standing too close (particularly in Hardcore game modes) when an enemy triggers it, it will hurt or kill them as well.

Claymores are often also used as an early-warning system that enemies are coming. They are now also temporarily disabled by enemy Stun Grenades and Flashbangs detonating nearby, including those thrown by the original planter of the mine. In Hardcore game modes, friendly Stun Grenades and Flashbangs also cause the same effect. Deactivated Claymores will spark and smoke a little. After about five seconds, the Claymore will reactivate and will explode as normal when triggered. Additionally, Claymores are immediately placed when the "equipment" button is pressed and released, instead of being drawn with one button press and placed with the primary "fire" button, as in Call of Duty 4: Modern Warfare.

A Claymore being held in Call of Duty: Modern Warfare 2

Planting the Claymore in Call of Duty: Modern Warfare 2

Render of the Claymore

"Directional anti-personnel mine that triggers a proximity-based explosion"
— Create-a-Class 2.0 description

Claymores only appear in the last section of "The Defector". They are primarily used to defend against the waves of NVA forces at this portion of the game. They can be found on top of a wooden box. The player can carry up to five Claymores before having to pick up more. Once those are placed, more can be collected from the box, the maximum number being 20 claymores.

When equipped, the player gets one Claymore to use. It functions almost identically to prior games in that it will be triggered when movement is detected by the red laser diodes. Like before, Claymores need to be carefully placed, as not only can the red lasers give away the Claymore's position, but the orientation of the placed Claymore is critical in determining where the player wants the explosion to happen. Claymores that are laid by the player can be picked up and re-stowed in the equipment slot if the player would like to re-position it or save it for a later time.

Like in previous games, the Claymore is a solid tool for a defensive player, with the Claymore being able to score a free kill on an enemy that looks to come after the player and their defensive position. Even if it doesn't get a kill, the mere detonation of a Claymore can alert its user to prepare for incoming opponents.

Claymores, like before, have their limitations. They can be temporarily disabled by Concussions and Flashbangs that explode in the Claymore's proximity, as well as disabled by a Jammer until the Jammer is either destroyed or moved to a point where the Claymore is not in the Jammer's reach. These can be used by incoming enemies to advance through the point that the Claymore is guarding unscathed, so users should be aware of this shortcoming of the Claymore.

The Claymore is also, as always, able to be destroyed by damage and it is not very bulky, so one should be careful to conceal the Claymore so that it doesn't get destroyed too easily. Like other pieces of equipment, enemy Claymores will glow bright red to Hacker users, and this will remove much of the element of surprise that any Claymore has, as the Hacker user can easily destroy it by shooting through a wall or just carefully tripping the Claymore themselves. Hacker Pro users can even hack and convert the Claymore to work for them, so do be aware of if the enemy has Hacker Pro users.

Enemy Attack Dogs and RC-XD vehicles will also trigger the Claymore. The Claymore will usually either kill or destroy those killstreaks, but RC-XD's can use their speed boost to evade the explosion, and there will almost always be more than one Attack Dog to deal with. Finally, Flak Jacket users can survive a direct explosion from a Claymore in Core game types. While Claymores can still hurt Flak Jacket users to a degree, Flak Jacket will prove to be an annoyance to Claymore users.

Despite the numerous ways with which Claymores can be dealt with, they remain among the most popular equipment pieces in Black Ops Multiplayer due to their lethality and ease of use.

Claymores are usable in all Zombies map with the exceptions of Dead Ops Arcade and Shangri-La, where they cost 1000 points to purchase off the wall. The player receives two when first bought, and they are restored after every round at a rate of two, like grenades. Claymores come in handy in the higher rounds due to their very high power, and they are often used to help a group of players surviving in one spot, as players that are reloading can use the Claymores to protect them until they have finished reloading. The Claymore's damage increases with every round. Like with grenades and Monkey Bombs, getting a Max Ammo power-up will replenish the amount of Claymores the player has. Claymores also do not harm the player when detonated even if a zombie triggers it right after being laid down by the player.

A different version of the Claymore called the Spikemore appears in the map Shangri-La, which fires Punji Stakes when triggered.

A Claymore being held in Call of Duty: Black Ops

A Claymore being highlighted by Hacker in Call of Duty: Black Ops

Claymores are unlocked at rank 53 they can be picked up and moved after being placed like in Call of Duty: Black Ops, but cannot be resupplied by the use of the Scavenger perk as in Call of Duty: Modern Warfare 2.

In Survival Mode, Claymores are purchasable at Level 2 in the Equipment Armory in increments of five. They are useful for protecting flanks as they have high damage. At later rounds on tier 3 and 4 maps, or very, very late rounds on tiers one and two, Claymore Experts will put claymores at flank points across the map.

The Claymore in 3rd Person

"Directional anti-personnel mine that triggers a proximity-based explosion."
— Create-A-Class Description.

Claymores return in Call of Duty: Black Ops II. Claymores can be replenished by Scavenger, like their Call of Duty: Modern Warfare 2 counterparts. Caution is recommended when placing the Claymore. An enemy player may run into it and its detonation can kill the owner of the Claymore if not at a safe distance away from it.

Claymores reappear in Zombies, functioning in the same way as their previous appearance:

5 (Extinction)
Claymores were cut from multiplayer,[1] but appear in Call of Duty: Ghosts Extinction mode. They can be found in Search Piles or by a Level 3 Team Explosives or Random Supplies. It should be noted that claymores can damage the drill when they explode, so it is ill advised to place them directly next to the drill. 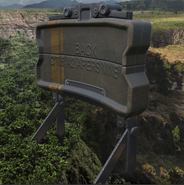 The Claymore model that can be seen with the Black Ops III ModTools.

A box of Claymores that can be found in Breach.

The Claymore returns in Call of Duty: Modern Warfare (2019). It can be placed at corners and near doors. The Claymore can be temporarily disabled when under the effects of a Flashbang or a Stun Grenade. With the Spotter perk equipped, players can hack enemy claymores. With the E.O.D. perk equipped, players can survive the blast of an enemy claymore.

Upon death, placed claymores are removed after a small period of time.