Fire From the Sky

" An SFSG team moves into the commercial airport to clear out any Russian presence."
— In-game description

"Clean Up" is the eleventh campaign level in Call of Duty: Modern Warfare 3: Defiance, it takes place in Baltimore airport that is currently under Russian control and British S.F.S.G who have managed to infiltrate the interior attempt to eliminate remaining Russian presence.

This mission's plot revolves around Hunter aiding a group in clearing out a Baltimore airport. Hunter continues to play a large part in the mission as he guides the group to through the facility, securing it from the Russians.

The mission opens up with Lewis leading the squad up a ramp and into an unused airplane hull to set up an ambush on a Russian patrol. The group succeeds and then rushes outside to see two Russian helicopters taking off. They request aid from Hunter, who takes care of the copters and fires a missile at the ground near the group, eliminating quite a few Russians. The squad eliminates the rest of the Russians and then proceeds to the baggage area, where Ridley must override a code to allow the group access to the inside of the main facility.

After a firefight in the luggage room, Ridley sets a charge on a door and the group breaches into another room, fighting their way up into the main part of the airport. The squad then enters a large lobby where Russians can be seen retreating. Rubble covers most of the floor since this place has been bombed by the AC-130, as Trascall mentions.

The squad fights up a set of stairs before reaching the main lobby, where screens still displaying arrival and leaving times can be seen on screens. The group fights past this area and then into a room that has had a hole blown into the roof. Metal detectors and baggage checking devices hint at what this room was used for.

Lewis's Squad pushes through a shopping area where Russians are hidden behind pillars as they rush to cut off an attempted Russian escape. The group nears what is referred to by a sign as "Gates A", only to rush to the Transport and find the plane ready for takeoff. Lewis calls in Hunter to make a last minute Strike, and the airplane goes up in flames.

Russian Plane before being destroyed.

Russian plane after being hit by Hunter.

The ambush Lewis sets up at the start of the mission. 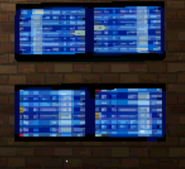 Flight times at the airport.

Ridley approaching doors that he must override to grant the squad access to the airport.
Add a photo to this gallery

Retrieved from "https://callofduty.fandom.com/wiki/Clean_Up?oldid=2542832"
Community content is available under CC-BY-SA unless otherwise noted.