For the melee weapon with a similar name, see Cliffhanger (weapon).

No Russian
Takedown (if No Russian is skipped)

"An American satellite has crashed on Russian territory. Locate and retrieve its ACS module containing vital information on the U.S. defense grid before the Russians decrypt it."
— Call of Duty: Modern Warfare 2 Campaign Remastered level description

"Cliffhanger" is the third campaign mission of Call of Duty: Modern Warfare 2 and Call of Duty: Modern Warfare 2 Campaign Remastered. Captain John "Soap" MacTavish and Sgt. Gary "Roach" Sanderson of Task Force 141 must infiltrate a Russian airbase in the cold mountains of Kazakhstan. There, they must recover a module from a downed satellite before the Russians can make use of its information and abilities.

The level begins with the player playing as Sergeant Gary "Roach" Sanderson. He and Captain John "Soap" MacTavish are resting on a ledge on the side of a mountain. After a MiG-29 flies overhead, Roach and Soap start climbing a wall of ice with ice picks. There is a harrowing moment when a pair of MiG-29's take flight overhead, nearly dislodging Soap from his position on the cliff.

Once at the top, Roach and Soap jump a small gap. Roach does not make it and nearly falls to his death when Soap grabs his hand at the last moment, saving his life. Soap brings Roach up, and they climb up the rest of the mountain.

Here, Soap teaches Roach to use the Heartbeat Sensor attached to his ACR (which can be turned off and on, unlike multiplayer). They simultaneously down enemy patrols as they move to the airbase. Captain MacTavish then climbs a nearby ridge to provide over watch with his thermal sight, while Roach infiltrates the airbase.

Roach proceeds to the fuel depot under the cover of the blizzard using the heartbeat sensor to thread his way through vehicles and patrols. He then plants C4 on the fuel depot to serve as a diversion in the event that a quiet extraction is not possible, and moves to a hangar, rejoining Soap, to recover a crashed satellite containing an American ACS module. MacTavish takes out the lone guard inside the hangar and, directs Roach upstairs to retrieve the ACS.

As soon as Roach grabs the ACS module, Russian soldiers hold MacTavish at gunpoint and the base commander Major Petrov, threatens to kill MacTavish if any other soldiers that were with him do not surrender in 5 seconds. As Petrov counts down, Roach detonates the C4, sending the Russian soldiers in disarray.

Roach and Soap use this distraction to fight their way out of the hanger and towards the runway using destroyed MiGs for cover. They reach a break in the fence and slide down a hill where they encounter enemy snowmobiles. After downing the crews the two men escape on the snowmobiles and evade their pursuers, who use snowmobiles and a helicopter in an attempt to kill them. The last obstacle is a giant gorge which is taken at full speed to reach the LZ where Kilo Six-One is waiting.

The player and Soap start on a cliff edge-side of a mountain. Soap states their break is over, so he will start to move across the ridge. Players should be careful, because one wrong move can mean restarting the mission. Soap will stop at one section of the mountain and will start climbing it. The ice is "good" enough so that the player's Ice Picks can climb it. Simply targeting the wall, then pressing and holding the "Right Mouse" to latch on the wall, will start the climbing process.

Pressing and holding "Left Mouse" will do the same for the other arm. If the player lets go, they will fall and die. Hanging on with one ice pick for too long will result in the ice breaking, and the player will fall. The player must climb and not stop until reaching the top, even when a jet flies by and nearly dislodges Soap (though the player will not be slowed down in any way).

When the player reaches the top, a checkpoint will be gained. Once on stable ground, Soap will sprint off the ledge and leap across a gap. The player will, however, start sliding to their doom. Right before Roach falls, Soap will grab him at the last second and pull him up. The player should quickly climb up the mountain in the same manner as the previous stretch of ice.

When they both reach the top, the player's primary weapon will be revealed as a silenced ACR with a Red Dot Sight containing a Heartbeat Sensor. The player's secondary weapon will be a silenced USP .45 with a Tactical Knife attachment. It should be noted that Soap is indicated blue on the sensor, but all hostiles are white, and constant attention should be paid to the sensor.

There are two two-man patrols up ahead. When Soap counts to three, he and the player will eliminate the guards from each patrol, although how each patrol is killed, whether split between the player and Soap, Soap killing both or the player taking out both, is up to the player.

Once the second patrol is eliminated, the storm will increase in intensity, and visibility will drop substantially. Soap will leave the player and climb up a ridge, using his Thermal Scope to take watch. Soap will then tap into the enemy's radio channel to eavesdrop on them.

The player should be cautious when entering the base. The player is "invisible" at a distance, but will draw attention to themselves if a guard spots them, creates loud noise (by destroying a vehicle or using unsurpressed weapons). For this reason, headshots should be attempted on patrolling soldiers, as shots to the chest may not always kill, especially on Veteran difficulty. It is also recommended that players eliminate enemies quickly, as they are grouped most of the time. Occasionally, Soap will help kill a guard if they get too close to the player, but only while they are outside. Note that the player is not invisible when entering a building, due to the lack of snowfall.

Dead bodies will cause enemy troops to become suspicious, and as such, the fewer enemies the player eliminates, the less dangerous the mission becomes. The Heartbeat Sensor should be kept active at all times, and the player should not be too concerned about any noise the ACR makes, as it is a suppressed weapon. The player may, if they wish, swap out the USP .45 for an enemy rifle for additional firepower, but only use it if spotted, as it will alert nearby enemies to the player position if used.

Soap will then instruct the player to find a fueling station to place a C4 charge, and that they can go to plan "B" if things go wrong. When the C4 is placed, the player is instructed to go to a different area. If the player alerted the patrolling Jeep, the player will have 30 seconds to reach that area before the C4 becomes compromised. Alternatively, the player may destroy the Jeep when Soap tells the player that it is coming, which will prevent this from occurring. The fastest way to destroy the Jeep is by using a weapon with a Grenadier attachment (it will destroy the Jeep and occupants in one shot); otherwise shooting repeatedly at the engine will be enough with a strong gun will destroy it as soon as the occupants step out. The player should be aware that there is an area containing a BMP near the tower and should be avoided as it has thermal sights.

When the player reaches the area, they follow Soap. He rams a guard onto the wall and then knifes him (the player always has the option of eliminating any targets before Soap does). The player and Soap will move into the main hangar, and Soap will move to inspect a crashed satellite that takes up the center of the hangar. While he does this, the player is instructed to find the ACS module upstairs, inside the building. Once it is retrieved, the player will hear a noise from outside, and an unseen soldier, identified as Major Petrov, will threaten to kill Soap if the player does not surrender, while Soap instructs the player to stay hidden. If, at any point during this sequence, Soap is killed, then the mission will be considered a failure and must then be restarted from the previous checkpoint. If the player fires their weapon, throws a grenade, or walks too close to Petrov, Soap will be killed and the mission will fail. Forced to initiate "Plan B", the player will automatically pull out the detonator. There is no immediate need set off the C4- the player may wait to activate the detonator, but it must be done before Petrov finishes his countdown from five. When the explosion occurs, all the hostiles will be distracted by the explosion. The player should kill the targets standing in the hangar's doorway and follow Soap. By now, the player should notice that the BMP has moved, and the blizzard has cleared up.

The player and Soap will fight their way through the base, and Soap will alternately cover, and ask for cover from, the player. Once outside the base, the two will slide down a slope. At the bottom, the player should immediately turn around and focus their attention back towards the top, as multiple enemy infantry will appear and start firing.

To shoot the G18, press the "Fire Weapon". The player and Soap will be chased to an extraction point about 2,500m away. The player should keep driving, ignoring enemies on foot, through the course to the extraction point. Across one stretch of ice, a helicopter will fire at moving targets on the ice, but the player will only need to be concerned with this for several seconds.

The G18 has unlimited ammunition, which reloads automatically when the current magazine is emptied (it cannot be reloaded mid magazine), so the player does not have to be concerned about wasting ammunition on pursuing enemy snowmobiles. It should be noted that while hitting vegetation will not affect the player, colliding with a tree dead-center while moving at full speed, especially while driving downhill, will be fatal. When the player reaches the extraction point, the snowmobile will automatically slow down and stop, and the mission ends.

Soap throws his cigar over the edge at the start of the mission.

Soap leaping towards the cliff.

Soap saves Roach from falling to his icy death.

The steep descent leading to the big jump at the climax of the mission.

Soap covers Roach while he infiltrates the enemy base.

Soap on the cliff. 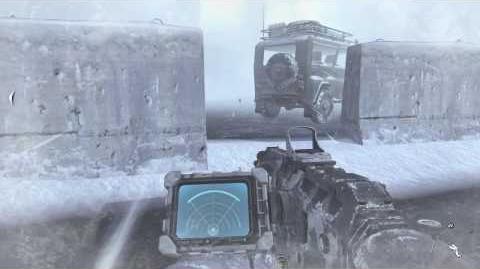