Get into base undetected.
Clean up Checkpoint.
Take out the vehicle’s driver.
Disable the security door before power is restored.
Advance to the data center.
Defend Hesh as he retrieves the data.
Escape through the vault door.
Exit the Facility.
Get to the Extraction Point.

"Infiltrate a Federation facility and retrieve data on their missile program."
— Mission Description

"Clockwork" is the tenth campaign mission of Call of Duty: Ghosts in which the Ghosts infiltrate a Federation base (using Federation uniforms) and download several files in regards to the Federation's missile program.

Elias Walker sends the Ghosts to infiltrate a Federation outpost high in the Andes Mountains. Their objective is to gather any intel on their missile program. While Kick is coordinating the Ghosts' moves, Hesh, Logan, Keegan and Merrick each carry duffel bags and wear enemy uniforms, and manage to take over an enemy vehicle and walk casually into the base. They approach a security checkpoint. When Kick kills the power they kill everyone at the checkpoint, several enemies equip themselves with flashlights to see in the dark, but the Ghosts neutralize them. They then approach a firewall. After Logan drills two holes in it, Keegan and Merrick each place mines inside the holes. After the charges are detonated, the base restores emergency backup power. After killing several enemy soldiers, they finally make it to a central computer. While Hesh downloads several files onto a hard drive, Logan, Keegan, and Merrick drop off their duffel bags on a table. A turret is in Logan's bag, thermobaric mines are in Merrick's bag, tear gas is in Hesh's bag, and shockwave claymores are in Keegan's bag. Logan sets up each of these defenses against incoming Feds as Hesh downloads the intel. When Hesh finishes, the four then pop smoke to cover their escape and head for an elevator. The elevator goes up to the entrance from where they came in. When they make it, Hesh pretends to be injured while Keegan helps him, and Logan limps on one leg. Merrick speaks in Spanish that they were injured while fighting the Americans. This gains them access to a vehicle. After putting some distance between them and the base, they attack another checkpoint which causes them to be pursued a number of enemy vehicles. One soldier speaks to Keegan and Keegan talks Spanish to them. Hesh draws a P226 out and loads it. The enemy notices Logan and Hesh shoots both soldier with his P226. They try to lose them by driving onto the ice, and Logan uses a turret to blow holes in the ice for the enemy vehicles to fall into. They eventually make it to the extraction point. A large friendly submarine (callsign: Neptune 1-1) emerges from the ice. Their vehicle drives onto the submarine. They get out of their vehicle, open a hatch, and the screen fades to black. 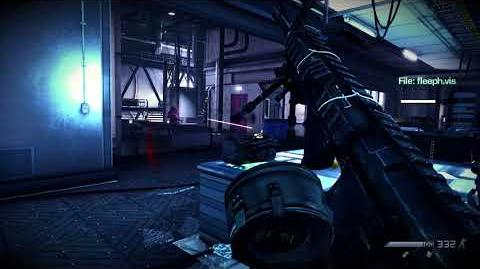