Coin-Op is an achievement featured in the Call of Duty: Infinite Warfare zombies map Shaolin Shuffle. It requires the player to complete the Skullbuster arcade machine featured on the map.

Around the map are two items: a spray cleaner and a rag. Each item can spawn in three different locations each.

Each location are as followed:

Once both items have been collected, hold the interaction button on the Skullbuster machine. The sounds of the machine's screen being cleaned can be heard before the blood stains on the screen disappear, rewarding the first skull.

On the rooftop of the Inferno Club is a line of mahjong tiles on a ledge directly across from the doorway that leads into the staircase back down into the club. Depending on the amount of players in the game depends on how many tiles are missing from the line. The player must first the missing mahjong tiles and bring them to the line.

The known locations for the mahjong tiles are:

Once the player has collected the mahjong tiles and placed them in the line enough to fill each missing spot, the player must now play a game of mahjong. The player will need to arrange the tiles in such a way that the line has four sets of three tiles and then one set of two tiles, where each triplet is either three of the same number (222, 444 etc.) or a set of three ascending numbers (123, 345 etc.). Arrange the tiles so that the line of tiles has four sets of triplets and then a double at the end. Some fireworks will go off above the tiles if the player has done it correctly and the second skull will appear on the machine.

NOTE: Both the third and fourth skulls cannot be obtained on a Skating Diva round.

Around the map at certain windows will be three candles to signify where the player has to insert a separate number from the number "1972". The window panels to the right of the candles is where the number is inserted.

Once all four numbers have been shot into their correct window panels in order, the third skull will be added to the machine.

If the player is too slow to insert a number into a panel, a buzzer can be heard and the player must wait a round before attempting it again.

However, each circle eventually disappears starting with the first one a few seconds after the player starts the parkour. If they are not fast enough or if the player falls off, the player must wait a round before they can attempt the parkour again.

In the second subway tunnel is a train that occasionally goes by. On the front of the train is the fifth skull, which can only be obtained by jumping into it. However, this will result in the player going down once they make contact with the train, so it is important to have Up 'N Atoms if playing solo or a teammate nearby to revive the player if playing co-op. Once the player jumps into the skull, they will now have the fifth skull.

On the Skullbuster machine is a phone number for customer support. Here, the player must go to one of the phones found in either subway and dial the number "555-0152". After a few seconds, a man will answer the phone before eventually hanging up. After the man hangs up, the final skull will be added to the machine.

Once all six skulls have been collected, every player in the match must hold the interaction button on the machine, where they will be teleported into the game. Here, four different colored blocks will be floating around the area, as well as the game directly in front of the player. The game consists of different colored skulls with various question blocks by the skulls. Each question block must be hit with a certain colored block in order for it to turn into a skull. The player's goal is to connect three of the same colored skull together with the blocks. Once three skulls have been connected, the three connected skull will disappear. The player must do this to clear the board a total of three times, each time with the board becoming bigger. The player will fail if the player gets three strikes by hitting a question block with the wrong colored block three times in a single set or if the player runs out of time. If the player fails, they must recall the customer support number again to get the sixth skull again. Once the player completes all three sets, they will win the game and be automatically returned to the map.

The Skullbuster machine as seen in one of Lee Ross' tweets. 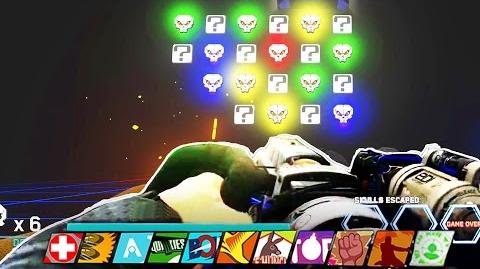