Cold Blooded re-appears in Call of Duty: Black Ops III, preventing players from appearing on the Thermal Optic, BOA 3 and player-controlled aircraft. It will also prevent the player from being targeted by Sentry Guns, Cerberus (scorestreak), GI Units, and R.A.P.S. in Ai-controlled mode. 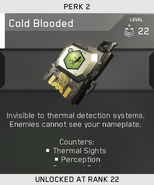 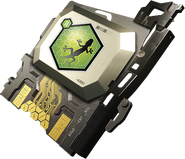 Cold-Blooded returns in Call of Duty: Black Ops 4 as a perk in the second slot.

Cold-Blooded returns in Call of Duty: Modern Warfare as a Tier 1 perk. Cold-Blooded users will not be highlighted by thermal optics and will be ignored by Sentry Guns, VTOL Jets and Support Helos, similar to Blind Eye from previous games, and will not trigger High Alert. It is unlocked at level 29.

Players with the Cold-Blooded perk are still visible on Recon Drones, but cannot be marked.

Retrieved from "https://callofduty.fandom.com/wiki/Cold-Blooded?oldid=2486770"
Community content is available under CC-BY-SA unless otherwise noted.