Collision is a multiplayer map in Call of Duty: Ghosts that is available in the Devastation DLC pack. It takes place in a large cargo ship that crashed into the Brooklyn Bridge.

Parts of the map take place on the half of the ship that is undamaged, while the other side has been torn apart from the impact with the bridge. The layout is very symmetrical and flat; featuring lots of places to jump on and mantle over, getting across miniature bridges and alternative routes such as sneaky underground passage ways. The center of the map is very heavily populated; players must be aggressive and cautious as it is very fast-paced area with two defensive points for snipers and campers. On Domination, this is where the B flag is located.

The map is mostly close range with little to no medium or long range areas. Because of this, submachine guns and shotguns should be more effective on this map.

Near a road spawn on the "southeast" edge of the map, squeeze the character's view to the right of the metal beams and down above the surface of the water. The Egg is hanging off the side of the bridge.

The A-10 Field Order in the background 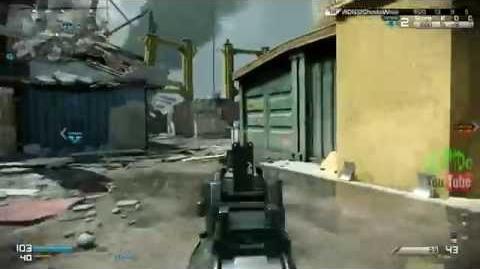