The Colossus Security Crew is the private security force that provides security and safety to the clients of the Colossus resort.

During the events of "Karma", the lower levels and server room of the resort were infiltrated by Cordis Die mercenaries wearing military gear over security uniforms. After DeFalco abducts Chloe "Karma" Lynch, the guards assist the Joint Special Operations Command team in recovering Chloe and repelling the Cordis Die attack.

The security team used A.S.D.s painted in a distinctive white livery, most of which were hacked or otherwise taken control of by the Cordis Die mercenaries. If the player has the Access Kit perk, they can release an unhacked security A.S.D. from a docking station.

One of the security guards.

Construction workers being stopped as hazardous materials were detected on their person.

Harper ordering a uniquely-modeled security guard to unlock the armory and prepare the remainder of the security team to fight. 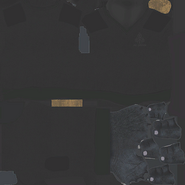 A texture showing the pre-release name of "Al Jinan".