"A soldier whose dedication to excellence borders on obsession, Stryker represents the future of the U.S. Armed Forces. Some say his synthesis of advanced military theory and technology make him the first true super soldier."
— In-game biography

Born in 1952, Colton Greenfield enrolled in Westpoint with a Service-Connected nomination at the age of 18, his father was a disabled war veteran and two of his brothers were killed during the Vietnam War. Colton graduated four years later as the top of his class with a Bachelor's degree in Mechanical Engineering. In 1979, following his first deployment, Greenfield received a stellar Officer Evaluation Report and made record scores in the Ranger Orientation Program. He was rapidly accepted into the 1st Ranger Battalion.

In 1980, Greenfield was among the Rangers who took and held the Manzariyeh Air Base near Tehran during Operation Eagle Claw, a failed rescue attempt of the 52 American hostages held in Iran. The next year, he was recruited into the Special Operations Group of the CIA's Special Activities Division based on his service record and peer recommendations. In 1982, Greenfield became the inaugural member of a CIA SAD/SOG classified task force focused on future warfare and counterinsurgency.

On July 23, 1984, alongside Frank Woods, Greenfield was part of the strike team sent to intercept Perseus forces, including Kaori Tanaka, who launched an assault against an Echelon NATO listening station located on Teufelsberg in West Berlin. As Greenfield, Woods and several operatives entered the control room to confront Tanaka, she activated a broadcast of the improved Number Program developed by Vikhor Kuzmin. In mere seconds, the operatives turned on each other and began attacking the two leaders forcing them to escape through a window as Tanaka fled the station on board of a helicopter, protected by a team of turned operatives. 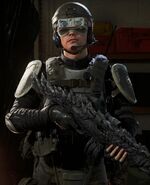 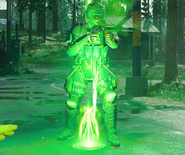