The Combat Axe, referred to as "hatchet" within game files, can be unlocked in the campaign after the player completes five challenges on the mission, "Pyrrhic Victory". Unlike its multiplayer counterpart, the Combat Axe must be picked up manually once thrown.

Unlike the Tomahawk (or even the Throwing Knife in previous Call of Duty games) the Combat Axe does not require the use of a button to recover after use. Simply walking over the Combat Axe or body the Combat Axe was thrown at will return it to the players' inventory. The Combat Axe (once thrown) is also highlighted in bright yellow, making the retrieval much easier than otherwise. Unlike the Throwing Knife, the Combat Axe will always bounce off anything that is not another player. Scavenger is useful as player does not have to pick up the axe itself but picks up the normal scavenger bags. Unlike previous games, the Combat Axe cannot be drawn instantly. When the Lethal Grenade button is held, the player firstly drops their gun as if he were about to bring out a grenade or any other equipment.

A hit from the Combat Axe inflicts 125 damage, meaning it is always an instant kill in any normal game modes regardless of where the hit registered on an enemy body. There are no exceptions to this rule anymore as there are no invincibility frames from deathstreaks as deathstreaks are no longer present from previous titles. There are no body multipliers for hitting the head or any other part of the body for the matter. Even if the Combat Axe hits the head for the kill, it will not show up as a headshot in the killfeed.

The Combat Axe is quite useful as it will almost always ricochet meaning it can travel great distances regardless of the angle it was thrown at, unlike the Throwing Knife from previous titles.

Much like the Tomahawk and Throwing Knife, it can be replenished using the perk Scavenger.

The Combat Axe from the Multiplayer Reveal Trailer

A render of the Combat Axe 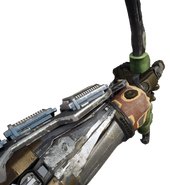 The Combat Axe being held in first person. 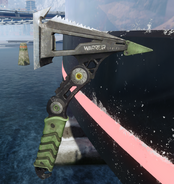 The Combat Axe in the Create-a-Class menu.

The Combat axe returns in Call of Duty: Black Ops 4 as an equipment. It also has a different model.

The Combat Axe returns in Call of Duty: Mobile and was added a part of the Season 3 update.