Combat Training is a game mode featured in Call of Duty: Black Ops, Call of Duty: Black Ops II and Call of Duty Online.[1] It serves as a simulation of online multiplayer for those who are new to it and those who want to try out new tactics or practice with different weapons. It features a separate ranking and unlock system with AI opponents instead of online enemies. It can be played cooperatively. The players can change how difficult it is to kill the AI opponents much like single player's difficulties: Recruit, Regular, Hardened, and Veteran. The bots can play on any map in Free-For-All and Team Deathmatch games, now with the option of playing Hardcore or Core. One interesting note, however, is that Combat Training only allows the players to practice on Free-For-All and Team Deathmatch modes, and not more tactic-based modes like Search & Destroy. Treyarch’s MP Design Director, David Vonderhaar, responded to a question about this in the official Call of Duty Forums. His comment was that the A.I. Bots are not developed enough to take objectives yet, such as capturing flags and arming/disarming bombs. He did say a more intelligent A.I. was a possibility for future Call of Duty titles. However, it is possible to play other gamemodes using the /g_gametype command in the developer console when playing. In this mode, there is no option to perform a Wager Match.[2] One can, however, use the Command Console on the PC version to do so.

After the implementation of a patch, Combat Training was made available under the Split-Screen multiplayer menu (console only). This means Combat Training can be now played offline with up to four local players. The most notable difference is that only 10 players can join (up to six slots are reserved for bots) instead of the 12 available online. Unlike its online counterpart the player cannot level up as everything is unlocked from the start. There are also strangely no Hardcore game modes in local Combat Training.

In Combat Training it is possible to rank up and unlock features just like normal multiplayer. However, there is no prestige mode without glitching. This mode also does not have leaderboards. It has a separate ranking system to other game modes. Players cannot transfer unlocks, ranks, or CoD Points from Combat Training to Multiplayer and vice-versa.[3]

In a post on the official Call of Duty forums, Lead MP Designer David Vonderhaar posted that Combat Training would require an internet connection to be able to play the mode. He listed it amongst the other game-types showing the differences between them in the ranking system. The only offline modes he listed were vague four player split-screen and LAN (system link) options. Two player split-screen online was also confirmed in the same post.

On the other hand, information on the official site suggested that there was offline split-screen, "Jump into Combat Training and hone your tactics offline against A.I. bots in both Free-For-All and Team Deathmatch game modes," and "Combat Training allows you to play against enemy controlled AI with your friends, online and split-screen." As well as this, Community Manager Josh Olin confirmed that the mode was playable offline via his Twitter account.[4] Dan Suarez, Executive Producer, also mentioned when asked if Combat Training had local split-screen play that, “Yes, you can play split-screen on the combat training mode and on MP."[5]

In a later development, the official Call of Duty website had changed its information regarding Combat Training. It had dropped saying that the mode was available offline as originally intended. Wii specific information had also been added, quoting that this specific version of the game also did not support an offline split-screen mode. David Vonderhaar also stated on Twitter that the mode was originally intended to support both off and online modes. His comment to a user on the service suggested that the person who programmed Combat Training also wanted both options.

As of the April 28, 2011 update, bots can now use equipment. This allows bots to properly set down traps (like claymores) and also drive around RC cars. This adds to the overall realism that the player would find against human players. 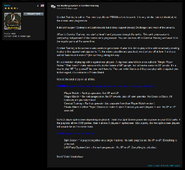 A player getting a kill in Combat Training.