For other uses, see Commando.

Commando significantly increases the player's melee distance from 128 inches to 176 inches (from 3.2 meters to 4.4 meters), allowing for a near-instantaneous forward dash of about three meters when striking a target. While the high speed of the dash frequently causes players to refer to it as a "teleport", the character model does in fact move through the intervening distance and the player is vulnerable throughout the dash and can be killed after initiating the strike but before successfully completing it. The dash will only trigger if the player initiates a melee attack with a valid target within dash range and approximately centered on screen; if the target is too far to the side or out of range, the character will simply make a regular knife swing instead. Additionally, while the dash will automatically correct for a small degree of movement on the part of the target, it is possible for the melee strike to miss if the target is moving too rapidly or if the player encounters an obstruction while dashing. Also, the dash can trigger whether the player is moving or not, and if the player tries to stab someone as they pass by a corner in which the player is hiding, it can effectively pull the player out of cover.

Commando is also useful with the Riot Shield as the shield is heavy and with Commando it allows users to inflict an attack on hostiles quicker. The Tactical Knife is also common with Commando as it increases the knife speed greatly.

The Pro version (unlocked by making 20 melee kills with the perk equipped, including the knife, Tactical Knife and the Riot Shield) completely negates damage from high falls, which can be tactically exploited on maps with long drops such as Quarry, Favela, Sub Base, and Underpass. 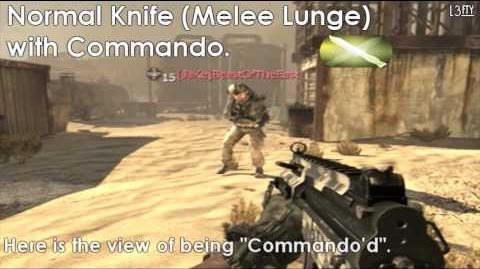