For another variant, see XM4.
For other uses, see Commando.

The Commando is used by Alex Mason, Frank Woods, and other Studies and Observations Group members in multiple missions, the first being "The Defector," in which it has a Grenade Launcher attached. It is the main starting weapon for all campaign missions in Vietnam, with the exception of SOG. Friendly soldiers will drop them when killed (most of the time with Dual Mags or no attachments). It is seen in "Victor Charlie" with a Grenade Launcher attached once the SOG assault the Vietnamese village. In the PC version, it has the Tiger camouflage. It is used for the last time in "Crash Site" with an ACOG Scope attached.

The Commando is unlocked at level 44.

The Commando is also one of the few fully automatic assault rifles that is a one shot kill at all ranges in Hardcore game types, making the Commando an extremely lucrative option in that game mode.

The Commando is fully automatic, and has a rate of fire of 750 RPM. 750 RPM is unremarkable. It's not strong, it's not weak.

The Commando's handling characteristics are average for an assault rifle. The Commando allows users to move at 95% of the base speed, strafe at 40% of the base speed, aim down the sight in 250 milliseconds, and the Commando has average hip-fire spread. the Commando's reloads are among the quickest for all assault rifles, with the reload animation lasting 2.05 seconds long, or 2.55 seconds if the magazine is empty. The user can Reload Cancel after 1.55 seconds. This reload cancel speed is second only to the M16 among assault rifles. Reloads with the Commando are remarkably quick, softening the need for Sleight of Hand.

The Commando has an average magazine capacity of thirty rounds. The user has a starting ammo loadout of ninety rounds.

The Commando has the usual assortment of assault rifle attachments available to it. The Commando doesn't have much need for a Red Dot Sight or Reflex Sight, as the iron sights themselves are quite clean.

The ACOG Scope is a terrible attachment choice on the Commando, as the centerspeed is lowered to 1100 and the aim down sight time is slowed down to 350 milliseconds, the same speed as the LMGs. Avoid the ACOG Scope like the plague.

The Infrared Scope is similarly awful, lowering the centerspeed to 1300, heavily increasing idle sway, slowing down the aim down sight time to 350 milliseconds, badly reducing definition on the environment while aiming, and Ghost Pro users may as well be invisible when aiming. The Infrared Scope should never be used seriously.

Extended Mags increases the Commando's magazine capacity to 45 rounds, and makes reloads less common, as more of the starting ammo loadout is put in the weapon to start, and ammo is distributed across only three magazines instead of four. Extended Mags never hurts, but reloads aren't a sore spot on the Commando thanks to its quick reload speeds. Extended Mags' problem is that it has to compete with Dual Mags, which many consider to be better, but Extended Mags is the superior option if using Scavenger, as Dual Mags' advantage of extra ammo is negated in that instance.

Dual Mags makes every other reload faster, and increases the starting ammo loadout to 180 rounds. Dual Mags is easily the strongest attachment option for most assault rifles, and the Commando is certainly no exception. With Dual Mags, the need for Scavenger and Sleight of Hand is pretty much neutered.

The Suppressor reduces muzzle flash, makes the Commando sound much quieter when firing, and the user will not appear as a red dot on the Minimap when firing the Commando. However, the Suppressor badly reduces the Commando's range, as the damage drop-off will start at 12.5 meters and end at 25 meters. This gives the Commando a three hit kill range of only twenty meters, in line with SMGs like the MP5K and the AK-74u. The Commando's range is significantly dwindled, but twenty meters for a three hit kill remains somewhat capable for medium range combat, and with added stealth bonuses, the user can catch enemies off-guard more easily.

The Flamethrower is another close-quarters bolstering option that can be very useful for cleaning out a room full of enemies. Its pitiful range, delayed killing ability, and the fact that Flak Jacket Pro users are virtually immune to the Flamethrower badly holds it back, but it can be useful in a pinch.

The Commando is extremely similar to the AK-47, as both assault rifles share the same damage profile, rate of fire, recoil, and centerspeed. The Commando has a superior reload speed, no gunkick, and the Commando's M203 Grenade Launcher fires faster than the AK-47's GP-25 Grenade Launcher. The AK-47 sways more slowly and has a much more effective Masterkey. Users should only really use the AK-47 if they really want to use the Masterkey.

The Commando is available through the Mystery Box and is very effective when used in conjunction with Speed Cola due to both high accuracy and power. However, its high rate of fire may burn through ammo quickly, especially if the player is using Double Tap Root Beer.

When the Commando is Pack-A-Punched, it becomes the "Predator". It gains a 40 round magazine, Dual Mags, higher damage (one-hit-kill with a headshot until round 12) and extra reserve ammo. Compared to other Assault Rifles, it has higher damage while retaining its easy-to-handle characteristics, while its lower ROF can be redeemed via Double Tap Root Beer. Due to such characteristics, it is one of the more worthwhile assault rifles to Pack-a-Punch, along with the Galil and the AUG.

The Commando in first-person

Diving with the Commando

The Commando in Call of Duty: Black Ops Zombies

The Commando in third-person in Call of Duty: Black Ops Zombies

The Predator in Call of Duty: Black Ops Zombies

A Commando with all the attachments, a rare glitch that occurs in "The Defector"; it cannot be picked up. 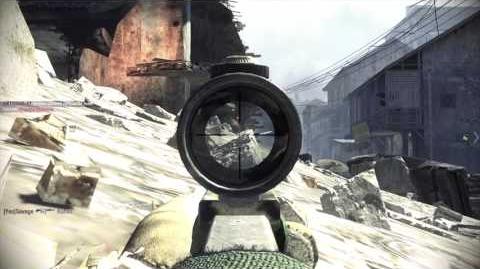 The Commando was seen in a behind-the-scenes trailer for Call of Duty: Black Ops II. However, it did not appear in the game. Its pick-up icon from the previous game is still present in the game files.

The Carbine appears in Hostiles mode. It can be acquired from Weapon Drops, and is found with ACOG sight. It also appears in Mutually Assured, used (and can be dropped) by the enemy faction, and starts to appear as early as round 3. It is rare in this sense, and it will always have a Red Dot Sight. It also appears in the map Hostiles on the Range, eventually used by Close-Range Bombers.

The Carbine in first person