The Common Defense Pact [1] is a faction in Call of Duty: Black Ops III. It is is competing with the Winslow Accord in the Third Cold War. It appears to be the spiritual successor of the Second Cold War-era Strategic Defense Coalition, as well as being the successor to the European Union.

Active since at least 2037, the Common Defense Pact has its origins in the disintegrating European Union. By this period of time, Russia had become the primary buyer of Poland's foreign debt. While the United Kingdom, France, and Germany left the European Union, the EU chose to fill the void by admitting Russia as a new member state and formed the Common Defense Pact; a mutual economic and military defense alliance between the various European States in an effort to secure their interests in the twenty-first century.[2]

The CDP owes its inception to the economic and political turmoil that occurred in the aftermath of the Collapse of the European Union as well as rising geopolitical competition over dwindling oil sources and access to limited resources such as rare earth elements necessary for high-tech industries. Issues were also compounded by protectionist economic policies taken by national governments towards their growing private space sectors.

After France and Germany had withdrawn from the EU and the Euro had collapsed, Poland signed the Warsaw Purchase in 2025. This treaty returned Poland to solvency and offered energy security in return for commitments on political issues and protectionist and preferential trade guarantees on the purchase of natural gas and other energy exports from Russia, as well as military hardware. The Warsaw Purchase would form the template for the treaties that would follow; indeed, the text of the Warsaw Purchase remains more or less unchanged in the articles of incorporation used by the CDP to the modern day.

In 2026, Hungary, followed by Romania and then the Czech Republic, would each sign their own treaty with Russia. These countries governments denounced the "EU Rich Clique" for abandoning its smaller economic members during a time of crisis. In 2027, Bulgaria, Finland, Kazakhstan, Greece and Ukraine would also sign their own treaties with Russia. Russia drafted Trans-European Treaty, which formalized the Russo-European Super-Block of Nations.

By 2028, NATO, internally divided between its Trans-European and non-Trans-European members, was formally disbanded. Algeria, Belarus, Cuba, Estonia, Latvia and Slovakia would all join the Trans-European Treaty by the end of the year.

Military tensions escalated during 2029, when Russia, eager to demonstrate that its ageing ICBM program was still a credible threat to the US' increasingly sophisticated Ballistic Missile Defenses, knocked out an ageing American telecommunications satellite using a repurposed ICBM. Two days later, a US Aegis Cruiser destroyed a Russian commercial rocket carrying three GLONASS satellites during its launch phase. The Americans would deny this was deliberate, claiming their system incorrectly identified the rocket as an ICBM launch and made an automatic interception.

In 2030, the nascent trade-and-energy hegemony expanded substantially, with Angola, Nigeria and Pakistan all joining. The African nations brought with them substantial petroleum reserves while Pakistan brought mineral wealth in return for assurances on its manufacturing sectors which were starting to suffer from local manufacture.

In 2031, the Lomonosov Incident would draw the US and Russia into conflict again, with the destruction of the US research vessel, the USS Pleasant, by the Russian navy in contested waters, highlighting the two sides increased competition over undersea mineral and oil rights.

In a surprising move in 2032, Germany would sign the Trans-European Treaty, bringing its own substantial industrial and financial base, as well as pledges over membership from Austria and Italy.

Birth of the Common Defense Pact

In 2036, a joint naval exercise in the East China Sea between American, Chinese and Japanese vessels, drew condemnation from Russia, Pakistan and Iran. In a climate of the worsening global Recession of the Poorest, Iran signed the Trans-European Treaty.

At the ceremony, the Iranian representatives proposed that the existing treaty be upgraded to a mutual defence treaty. In the highly stage managed scenes that followed, all Trans-European Treaty members (aside from an abstaining Germany) voted to do so. Thus the Common Defense Pact was born.

Under the terms of the treaty, an attack on one nation was an attack on all. Nations would maintain their national sovereignty but would also contribute funds annually to the training and supply of their allies' militaries. Later that year, Germany would withdraw from the CDP.

In response to the CDP's creation, US Secretary of State George Winslow would draft the self-named Winslow Accords in 2037, creating a mutual defense treaty that extended to all American allies.

The remainder of the decade also saw greater expansion for the CDP, with Libya and Syria both joining in 2037. Kenya would formally join in 2039 (after lengthy negotiations concerning mineral rights, due to Kenya's vast deposits of recently discovered rare earth elements), bringing the rest of the Nile River Coalition with her in 2040.

Due to a changing international situation, Italy left the CDP in 2041, following an election pledge in which the newly elected Italian government would leave the CDP and join the Winslow Accord.

Yemen and Somalia would join the CDP in 2051 and 2052, respectively 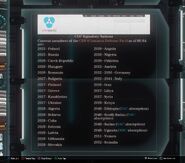 Map showing all CDP members, including the NRC