"Medium sized town. Force the enemy back across the dry riverbed in classic engagements."
— Description

Containment is a multiplayer map in Call of Duty: Ghosts available in the first downloadable content pack Onslaught, which was released on January 28th, 2014 on Xbox systems and February 27th, 2014 on all other platforms.

Containment is set in the urban streets of Mexico.

The map is mostly close-medium range, but certain spots may be alright for sniping. The bridge and insides of buildings are close range, but the area below the bridge is good for medium range. However, it's also good for some close range. As a vantage point, maneuvering to higher ground, roof or second floors within buildings offers various recon positions. By going to the alleyways, it'll serve as alternative routes for either entering buildings or navigating through out the map.

Both of the teams spawn ahead of each other directing to the bridge.

The largest building structure in the map having multiple ways to enter. Most of the time, the Ghosts team will probably enter through this building overlooking the map. One of the rooms contains a cracked wall that overlooks the pool bar roof where the B Flag is located in Domination.

Bridge and Under Section

The Bridge is probably the danger zone of the map because there is a truck containing radioactivity that scrambles the radar if going under or passing through. It is optional to pass at one's own risk. Hopping down to the Under Section offers alternative passage through the alleyways of buildings. It also give enough time to regenerate health.

These building unlike the Church and small restaurant, have second floors and roof tops allowing anyone to patrol the map but not all.

This Building only has one floor to enter. It doesn't serve much other than navigating through venturing to the Church. There is gate that can be permanently unlocked if one strikes at the chain closing it.

This unlike the Small Restaurant has a second floor. This building is the smallest of all accessible structures. There are two ways in entering:

Similar to the said restaurant, a wooden window can be breached. This window is also heavily guarded and watches the roof of the pool bar.

This Building doesn't have a second floor but has an accessible Roof Top giving snipers high ground patrol vantage point. One of the obvious ways to get on top is that a hole on the roof with some cement debris acts as a ramp supported by a pool table. A breachable door is in this building.

It too has no second floor. This isn't a very high populated structures but a lot of the time, but enemies will eventually pass by and the doorways can act as cover when gaining a kill.

Where the Federation is spawned, the A and B Flag are located outdoors while the Ghost would capture the C Flag indoors.

In the northwest corner of the map is a white red-striped building. Players go upstairs and look northeast. Behind the green building with "Transmission" is the Extinction Egg on top of the small white red-roofed building that can be shot and count as "hunted", only once. Players who find all four Extinction Eggs in each of Onslaught's four DLC maps will earn a bonus 2000XP for completing the operation.

Containment in the Onslaught DLC preview. 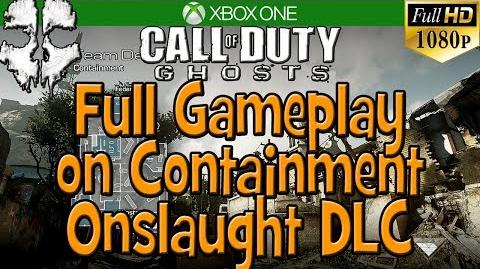