"The base model for the Conversion-Ready Binary Repeater-Standard, including aerial "Copy-Cat" companion capable of matching weapon output with additional blast. Supports three weapon mod-kits, and customized with an artificial intelligence that supports three unique voices."
— Intel

The CRBR-S is Requiem's first take on an experimental wonder weapon, and was designed and created by its Containment and Security Division on January 11th, 1985. In its base form, the CRBR-S comes equipped with a Copy-Cat companion module, a floating sphere that ejects from a port in the center of the weapon and rotates around it; whenever the CRBR-S is fired, the Copy-Cat will fire an additional shot at no expense.

Uniquely, the weapon can be modified on the fly using mod kits that can be dropped from zombies occasionally. Each mod kit will give the CRBR-S new functionalities; the Blazer mod kit will convert the CRBR-S into an assault rifle that fires a concentrated beam of blue powerful energy, the Diffuser will convert the CRBR-S into a shotgun that fires a horizontal flechette of five green energy projectiles, and the Swarm mod kit will convert the CRBR-S into a handheld cannon that fires a twist of two yellow explosives in two rapid bursts, which can additionally lock onto enemies when aiming at them through its unique sight. Should the player have a mod kit already installed, the player can switch it out by picking up another mod kit; alternatively, picking up the same mod kit as the one currently equipped will replenish ammunition. Additionally, each version of the CRBR-S features an artificial intelligence that speaks as either Elizabeth Grey, Oskar Strauss or Mackenzie Carver, and will react to how the player uses the weapon. Lastly, whenever the player depletes all of the ammunition of a mod kit, the kit will automatically detach from the weapon and revert back to the base CRBR-S.

In addition to being obtained from the either the Mystery Box, the Trials as a potential legendary reward, or as a potential reward from the Golden Chest during the Nightclub easter egg, a free CRBR-S can be obtained by completing a small quest.

To begin the quest, the player must first have opened the bedroom of Hotel Room 305 using a zombie infected by Brain Rot and built Klaus. While Klaus is deployed, the player can direct him to open a locker in the Switch Control Room. Inside the locker is a blacklight attachment for the player's weapon, which the player can toggle on and off.

Written on the walls in marker at the Garment Factory, Service Passage and Grocery Store are the numbers 1, 2 and 3 respectively, each correlating to one of the three dials on the safe in Hotel Room 305. Using the blacklight, the player can shine the light around the walls of each area, revealing a piece of the safe combination hidden in invisible ink. The player must remember all three numbers provided by the invisible ink text at each area and enter them into each of their respective dials on the Hotel Room 305 safe; while entering the combination, zombies will ignore the player. Upon entering the correct combination, the safe will open and reveal a single CRBR-S for the player to take.

The CRBR-S from the Mauer Der Toten trailer.

The copycat deploying from the CRBR-S in the trailer.

Discharge from the CRBR-S as seen in the trailer.

The CRBR-S inside the safe. 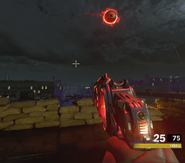 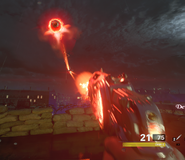 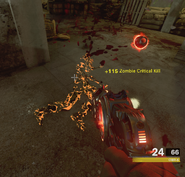 Zombie vaporized by the CRBR-S. 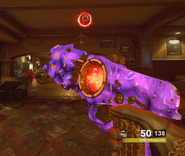 First-person view of the CRBR-S Blazer.

Full blueprint intel of the CRBR-S
Community content is available under CC-BY-SA unless otherwise noted.
Advertisement