"Intense combat in the aftermath of a Soviet ambush on American soil."
— Convoy's map description

Convoy is a multiplayer map featured in Call of Duty: Black Ops that was released for the Escalation downloadable content pack.

The map was inspired by Cold War fears of Soviet invasion. Part of the road on this map has collapsed, allowing players to drop down to the road below, and vice versa.

Convoy is a medium-sized map, although parts of the map are quite open, while still providing intense areas of close-quarter combat near the hotel, auto repair shop, and police station.

Like most maps, the most active area of the map is usually the centre of the map; in this case, the overpassing bridge and the road directly under it.

The map is balanced so each side has roughly the same advantages, though the Black Ops team has a slightly higher count of overwatch positions on their side of the map. The overpass itself is broken, leading to a small path that allows players to move between the two levels, onto the road underneath. This area is hotly contested, although considering it is a multi-level path, it's often easy to escape up or down, depending on where the opposition is coming from. From both sides of the bridge are two main flank routes that both connect to the road, providing access to and around the map.

Each side has a small overwatch and an arguably long sight range, giving snipers a chance to concentrate the enemy's movement towards the bridge. The outskirts of the map often provide the close-quarters combat an SMG would be better off dealing with than the cumbersome Assault Rifles or LMGs. A diner and its adjacent car park and the office building across the bridge are all very intense areas of the maps when combat switches to more close-up fighting.

Although the map is focused around urban combat and using every advantage, there are certain parts of the map where foliage is present, even heavy compared to more tropical maps such as Jungle. Sneaking past the main areas of battle isn't too hard - it's even beneficial if the game mode is objective based, as it allows one to move efficiently around the enemy's main defense.

Overall, it's a medium-sized map that caters to most types of combat. Most combat here, however, is limited or preferably suited to middle-distance combat, so Light Machine Guns and Assault Rifles favour best. The name of the sheriff department and the road signs indicate it is in Barton Springs, California.

The collapsed part of the road is patched up (but still cracked) for the game mode Domination, where the B Flag is placed on the bridge as opposed to under it.

A battle in Convoy.

The alarm system for the gas station.

A billboard warning of "campers".

The buildings around Convoy. 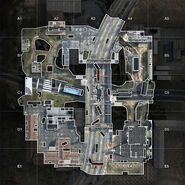 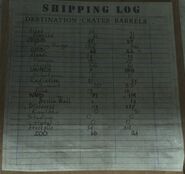 A police car near the sheriff's building. 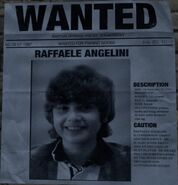 A WANTED poster of a beloved fan of Call of Duty: Raffaele Angelini.

A portrait of Stockpile found in several buildings.

A portrait of Stockpile found in several buildings.