M1 Garand, although the American weapons in a hut may belong to the other recon team members.

Private Cook is a member of the player's recon team in the opening cinematic for "Semper Fi" in Call of Duty: World at War. He is seen tied to a post, being beaten by a Japanese soldier outside the hut. After Miller has been rescued, he is seen escaping in a boat with PFC Allen and Gallagher.

He is later seen injured and being carried away on a stretcher in the mission "Blowtorch and Corkscrew". 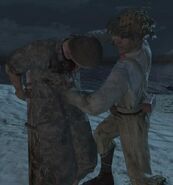 Cook being tortured.
Add a photo to this gallery
Retrieved from "https://callofduty.fandom.com/wiki/Cook?oldid=2467327"
Community content is available under CC-BY-SA unless otherwise noted.