As the in-game description suggests, the Cordite has the largest ammo capacity of the submachine guns at 60 rounds per magazine. This gives the Cordite great usability and allows it to excel both on long killstreaks and in prolonged engagements versus multiple opponents. The weapon boasts an average time-to-kill and middling, easy-to-handle recoil. Its damage model and low recoil allow the weapon to effectively win gunfights out to close-medium range with sufficient accuracy, but the player will begin to struggle to outcompete assault rifle users past that. To balance the large magazine, the Cordite suffers from a slower-than-average reload time. However, this does not unduly hamper the weapon, as the large magazine size reduces the frequency of reloads anyway.

If using the weapon out to medium range, optics such as the Reflex are recommended to improve performance, but choice of optic is largely up to user preference. The Quickdraw is a solid choice for snapping to targets faster, which can help with getting the first shot on target and winning close-quarters gunfights. The Grip can improve medium-range usability by reducing recoil, but due to the already-low recoil of the Cordite, is not always a necessity. AP Rounds and High Caliber tend to be more situational attachments that are useful less frequently than those previously mentioned, but do not hurt the weapon's performance and may be helpful in certain scenarios.

The Cordite appears in the zombie maps Voyage of Despair, IX, Blood of the Dead, and Classified, where it's available as a weapon within the Mystery Box for 950 points. When upgraded via Pack-a-Punch Machine, it becomes the Corpsemaker with the magazine size increased to 100 rounds and its ammo reserve increased to 500.

Cordite as seen in first-person view

Cordite with the Belt-Feed Operator Mod.

An early version of the Cordite.

An early version of the Cordite from the PC beta.

The Cordite returns in Call of Duty: Mobile. It was added as part of the Season 6 Once Upon a Time in Rust update.

The Cordite is a very versatile gun. It can deal high damage at close range and kill enemies quickly under its high rate of fire. It can also kill enemies at mid range with very low damage drop off for a submachine gun. It also features a large magazine size.

Aim down sight time is 300ms, slowest in its class, even slower than the majority of the assault rifles and tied with the LK24. In close range, it is advised to hip fire due to the unusually slow handling compared to the rest. However in return, it has one of the best hip fire spread in the game.

The gun can deal heavy damage to enemies even at mid range due to the low damage drop off. It also has very tight hip fire spread, making it very flexible at close range. With recent rebalances, the Cordite gets an ADS spread buff, which strengthens its ability to outgun other submachine guns at mid range. It can be found on floor as Rare blueprints, and in Airdrops as Legendary blueprints.

The Cordite in first person 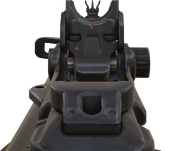