The Cosmic camouflage was obtained once the entire Call of Duty: Black Ops III community reached a goal of 500,000,000 headshots, with the challenge starting on June 9th, 2017. Upon completing the challenge, everyone was awarded the camouflage for free.

The camouflage itself is one of the Pack-a-Punch camos from the Zombies map Revelations, primarily featuring a green space-like void across the weapon. Unlike the Into the Void limited edition camouflage, it lacks the lightning surge effect. It also covers more parts of a weapon compared to the Into the Void camouflage. 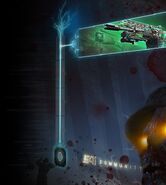 Promotional image with the Cosmic camouflage at the top of the thermometer.

The Prizefighters with Cosmic Camouflage.
Add a photo to this gallery
Retrieved from "https://callofduty.fandom.com/wiki/Cosmic_Camouflage?oldid=2406447"
Community content is available under CC-BY-SA unless otherwise noted.