For the boss from the Dead ops Arcade 2, see Cyber Silverback.
"Me back! My treasure!"
— The Cosmic Silverback in the end-game scene.

The Cosmic Silverback is the primary antagonist of Dead Ops Arcade, where he serves as the final boss at round 40 in the Tropical Forest arena. He will also appear at the end of a round, usually every five rounds, in an attempt to steal some treasure that spawns at the end of that round. After he roars for the first time during any appearance, the player(s) must keep their distance or they can die upon touching him; note that he roars immediately upon spawning at round 40, where he becomes immediately hostile. He will appear again when the players see their final scores after they all run out of lives, this time crushing the player with the highest score and stealing all of their treasure. 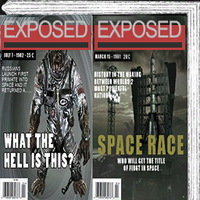 Fighting the Cosmic Silverback in the Tropical Forest