For the killstreak in Call of Duty: Black Ops, see Counter-Spy Plane.

counter_uav
After achieving a killstreak of four (or three if the perk Hardline is selected), the player can call in a Counter-UAV drone that will completely obscure the maps and minimaps of all enemies with static for 30 seconds. This effect is identical to that of the Scrambler perk at its closest range. As with either effect, any affected player that activates a killstreak reward that causes the full map to come up, such as an airstrike, will find that map and the player markers on it completely obscured as well. The Counter-UAV drone is identical to the UAV drone, and can likewise be destroyed in order to end its effect - it does, however, fly slightly higher than its Recon cousin. The Counter-UAV will (as its name may suggest) obscure enemy maps even while they have a UAV Recon drone active, even if the Recon drone is activated after the Counter-UAV. It is not available as a killstreak by default and must be unlocked. As with the UAV Recon killstreak, the player is awarded 100 XP upon its activation.

The emblem awarded for completing the challenge 'Interference III' for calling in 50 Counter-UAVs is shown to the right.

Counter-UAV_acquisition_MW3.ogg
The Counter-UAV returns in Call of Duty: Modern Warfare 3 as part of the Support Strike Package. It requires five points to acquire and lasts 23 seconds. The Counter-UAV functions identically to its Call of Duty: Modern Warfare 2 incarnation. However, using Assassin Pro makes the player partially immune to the Counter UAV's effect. A player using said perk can still see flag/bomb markers,friendlies, unsurpressed enemy gunfire, etc., but any UAV that is called in will not do its "sweep" across the mini-map as normally seen.

Level 33
The Counter-UAV returns in Call of Duty: Black Ops 2 and requires a scorestreak of 600. It functions exactly the same as previous titles except that it does not completely render the minimap useless to enemies as this can still be used for navigation and is visually distinct from the UAV, meaning players can easily pick it out as a priority. Players using Hard Wired will be immune to the Counter-UAV effects.

Every kill teammates get while a Counter-UAV is airborne gives the user 10 assist points towards their next scorestreak.

The Counter-UAV returns in Call of Duty: Black Ops III. When activated, the enemy minimaps are distorted by static. It can be shot down with a single rocket and has no countermeasures.

MW2 Killstreak CounterUAV.ogg
The Counter-UAV returns in Call of Duty Online unchanged from its counterpart in Modern Warfare 2, except in appearance. The counter UAV always flies clockwise above the map.

As the Counter-UAV does not have flares, it can easily be shot down by a single Stinger missile. Firing on it with most other weapons is effective due to its (relatively) low health and flying speed.

The appearance of the Counter UAV as it appears through a sniper scope.

A Counter-UAV flying above Dome.

A Counter-UAV about to be shot down by a Stinger missile.

The Counter-UAV after being hit by the Stinger missile.

The Counter UAV is a scorestreak featured in Call of Duty: Infinite Warfare. It is unlocked at level 24 and requires a streak of 600 points to earn. It is similar to its incarnation in Black Ops II, where instead of completely disabling the minimap it is heavily distorted, but enemies can still use the map to navigate. The Counter UAV is active for 30 seconds. Counter UAVs take only one rocket to shoot down, and come with no flares. 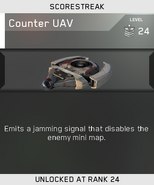 The Counter UAV being unlocked in Multiplayer.

No
The Counter-UAV is a returning Scorestreak featured in Call of Duty: Black Ops 4 that requires a scoretreak of 650 points (550 with COMSEC Device)

The Counter-UAV appears in Call of Duty: Mobile as scorestreak.

"A drone that constantly emits a scrambling signal, disabling enemy mini maps and incrementally disrupting their senses the closer they get to it."
— Description

The Counter-UAV in Call of Duty: Modern Warfare with a completely different function; instead of circling the battlefield and only jamming enemy radar, it hovers at a target location and scrambles enemy HUD and radar, which gets progressively worse the closer they are.