"Journey by river into Laotian territory, in search of Dragovich's compound."
— Briefing

Mason and SOG team sent to retrieve Nova 6 from the wreckage.

Mason starts out at a helicopter landing zone where soldiers are being dropped off. On the way to the docks, Mason gets on a boat with Reznov, Woods, Bowman, and a (randomly named) young marine who tells Woods that he has been assigned to this SOG team, to which Woods responds with a sigh and then, "Man the gun, don't get killed." Woods and Bowman each then pick up a Grim Reaper while Mason gets to his position. Mason commandeers the boat to the team's objective. The part where Mason pilots the boat is not playable on the Wii version, however, Mason is able to pilot the boat past the downed Huey, past the waterfall, and to the landing point. The Rolling Stones song "Sympathy for the Devil" does not play during this time and the young marine is never mentioned. Mason then hears Zack Johnson briefly speak before the song "Sympathy for the Devil" by the Rolling Stones starts on the radio. This song plays throughout the boat part of the level and will restart if killed. Mason controls an M60, Woods' and Bowman's M202 Grim Reapers, and the boat itself. Mason begins destroying enemy forces and infrastructure including radio towers, guard houses, and several ZPUs on moving trucks. This continues for some time until SOG run into an NVA PT boat that needs to be destroyed. After Mason succeeds in doing this, Woods will pull out the marine who had died in the battle. It then cuts to the interrogation room where Mason says, "That young kid didn't make it. I swear to God that Woods was crying, but he never let us see no tears." Cutting back to the boat, Mason parks it up at the next dock while

Woods and Bowman speak into a radio saying that they have a downed bird in the area, however the radio man responded with saying there is no contact in the area. After parking the vehicle, they commence looking for the Soviet cargo carrier carrying Nova-6. Mason is given a Commando ACOG Scope and a KS-23 as many Viet Cong and Spetsnaz troops appear. After fighting and progressing through enemies, friendly helicopters appear for an overwatch but are suddenly destroyed by Russian Hinds. The SOG came to the C-130 and walk across an unstable wing which nearly falls over. When inside, Mason will find the crate carrying Nova-6. Woods will open it, but will only find a China Lake and a map of the area, claiming that the Russians are trying to frame the USA. Soon enough, Spetsnaz and Viet Cong arrive and attack the plane. At some point, it is hit by a Hind helicopter and the plane crashes into the ground. On the ground, Mason observes Bowman being carted away by two Soviets and attempts to shoot them with an empty M1911. A Soviet will then kick the pistol out of Mason's hand as Dragovich and Kravchenko appear. Dragovich will claim that they need to make up for lost time with him and the mission will end with Kravchenko knocking out Mason by stomping on his head. 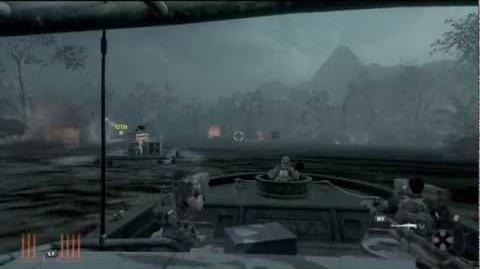 Concept art of the camp.

Concept art of the bridge.

Concept art of the crash site.