"These must have been the failed experiments Maxis mentioned."
— Doctor Richtofen

Crawler Zombies (called Creepy Crawlers in Dead Ops Arcade) are a special type of Zombie featured in Call of Duty: Black Ops. According to Dr. Richtofen, they are failed experiments. Crawler zombies are not to be confused with "crawlers", a common name for zombies that have had their legs shot/blown off.

"That thing could not ever have been human!"
— Takeo Masaki when killing a Crawler zombie.

Crawler zombies are skinny zombies who run around on all four limbs. Based on their appearance, Crawler zombies seem to be mutated much more than regular zombies. Richtofen gives an explanation that they were a failed experiment of some sort. They have a slimy, greenish gray shade of skin and appear to be wearing only either a loin cloth or shorts. They emit a very distinct trail of green gas that makes them quite noticeable among the horde. Furthermore, they have not retained their human facial features, and instead an over-sized angler fish-like mouth is the only prominent feature on the face.

Crawler zombies can be quite subversive and hard to see as they stay close to the floor. When killed, they will flip onto their backs, curl up (similar to a spider), and emit a cloud of green toxic gas that is dangerous to the player as vision becomes blurred, similar to the effects of Nova Gas in multiplayer (though looks and acts like Tabun Gas from Call of Duty: World at War multiplayer). They will not, however, release the cloud of gas if the final blow dealt to them is from a knife attack, Wonder Weapons, explosives; or if standing too close to a Teleporter.

They appear in the maps Kino der Toten, Five and a variant of them appear on Moon. In Dead Ops Arcade, Crawler Zombies appear at round 13 in the challenge round called "Creepy Crawlers." Crawlers zombies do not appear in Ascension, Call of the Dead or Shangri-La.

When a Crawler Zombie explodes, all zombies in radius of the explosion (excluding other Crawler Zombies) will die instantly which can be helpful in clearing large groups in the later levels.

Phasing Zombies are variants of the Crawler Zombie that appear on the map Moon. They are very similar to Crawler Zombies, except they disappear and reappear closer to a player. They can be seen from 0:20-0:30 in this video. While wearing the P.E.S., the player is immune to the Nova gas after their death, but can still be stunned by the explosion. They do not appear unless the player enters the labs in that same round. 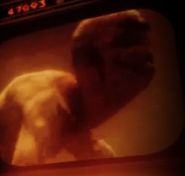 Another shot of a Crawler zombie

A picture of the gas zombie found at the end of Rezurrection Behind the Scenes.
Add a photo to this gallery

Retrieved from "https://callofduty.fandom.com/wiki/Crawler_Zombie?oldid=1220107"
Community content is available under CC-BY-SA unless otherwise noted.